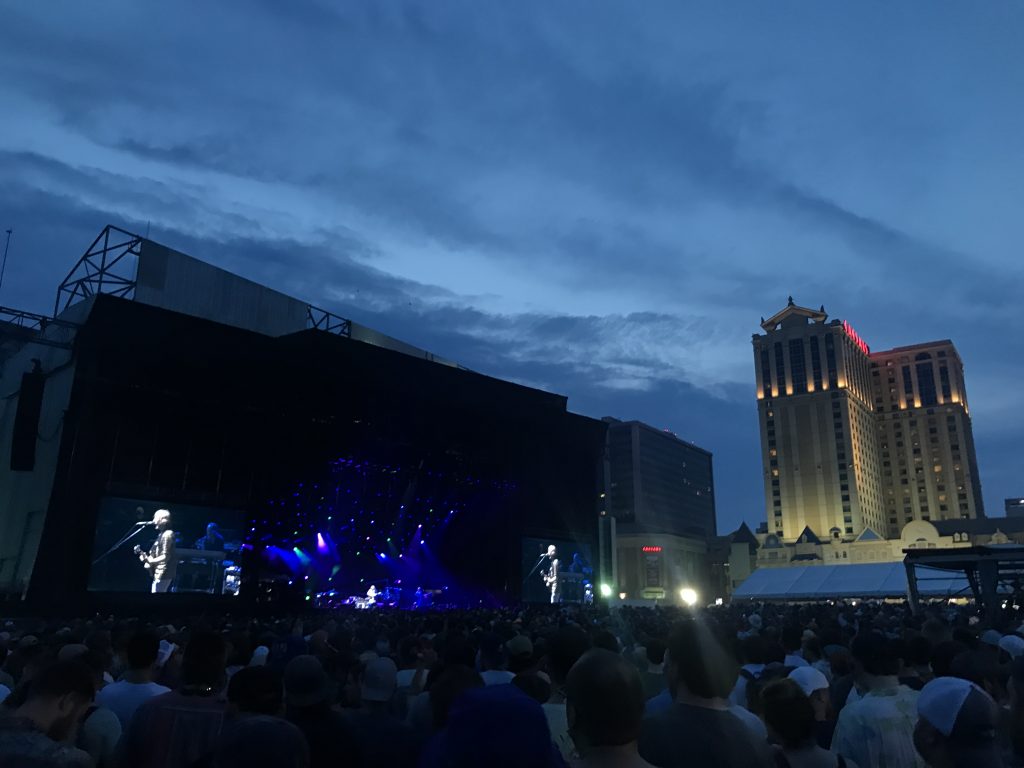 Covid-19 has changed things drastically for the music world, and as a music writer and podcast host, I’ve been wading in an ocean of patience waiting for a wave to bring me a fun, familiar and always exciting ride.

However, things always have a way of working out and the universe provides in mysterious ways, especially when it comes to Phish.

Originally scheduled for Aug. 14-16, 2020, the Phish Atlantic City beach concert received national attention and rarely does my hometown get mentioned nationally for anything positive.

Back in simpler times, I was excited and disappointed since that was the date of the 59th annual Philadelphia Folk Festival. I decided to leave my fate to the ticket gods and when the event sold out and I was left without a ticket, I decided to go to the folk fest.

The stars aligned and I purchased my 3-day pass instead of going through the traditional press process and geared up for three days on the beach, just blocks away from where I was born.

The venue, which managed to pack nearly 40,000 fans each night from Arkansas Avenue to New York Avenue between the boardwalk and the ocean – was within eyeshot of Boardwalk Hall and down the street from Bader Field.

It has been home to many beach concerts in the past including Maroon 5, Nick Jonas, Lady Antebellum, Blake Shelton, Jimmy Buffett, Blink-182, P!nk and even Vans Warped Tour.

All of these shows bring their own crowds and with them come traditions and tribes from parrotheads to cowboy boots to mohawks – the Phishheads bring doughnuts in a nod to the patterned muumuu that drummer Jon Fishman wears. 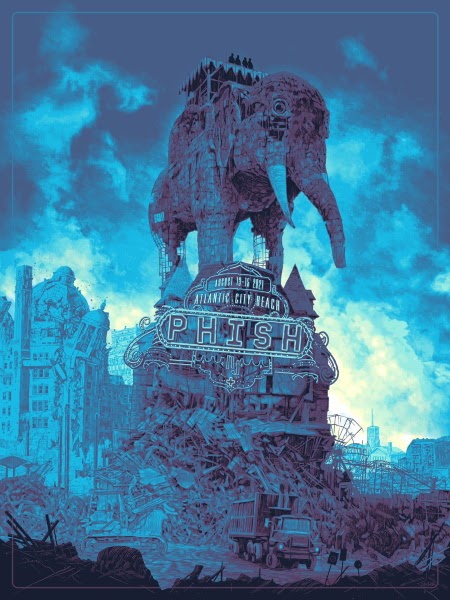 Before the show even started, there was talk about posters – and even I was looking to score one. The band commemorated both Lucy the Elephant standing atop the demolished The Traymore Hotel, both of which were depicted in the movie “Atlantic City” and mark the end of an era in Atlantic City, with the Marlborough-Blenheim Hotel crumbling in the background.

There was a pre-show setup at Kennedy Plaza in front of Boardwalk Hall where fans lined up beginning at 7 a.m. to get a spot for the posters, which went on sale at 11 a.m. and again at the merchandise booth at the show, which opened at 5:30 p.m. each night. I was in line before the gates opened and once I was through security, I walked to the merchandise booth and managed to get the coveted slice of paper before they sold out at 5:41 p.m. By 6 p.m. I had a Jameson and soda and a spot stage right.

The venue had a bit of everything, from festival food to local favorites like Vagabond and Mad Dog Morgan’s. Bally’s Beach Bar had the best beer in the house with Double Nickel and Dogfish Head.

I love the Phish crowds – the people are some of the kindest and caring fans in the world. There are nice people at all concerts and festivals and I’ve had some amazing experiences with fans, musicians and crew, but Phish always managed to surprise me. For example, at 6:35 p.m. someone handed me a few pairs of 3D glasses for no reason. The band kicked off the show at 8:03 with Trey Anastasio announcing a “hometown favorite” “Cars Trucks Buses,” before digging into “AC/DC Bag.”

By the time the band hit “Blaze On,” Anastasio switched up the lyrics with “we’ll be dancing on the beach” and then the band dove into a crazy jam.

“Welcome to the beach,” Anastasio said before playing “Wolfman’s Brother” and the band blew bubbles from the stage. Fishman broke out his first vacuum solo of the tour, according to Anastasio, for “I Didn’t Know,” who called it a song about “Traditional summer romance under the Boardwalk.”

At 9:45 p.m. the second set began with “Tweezer” and a minute later I got hit with my first glow stick, but it was like Anastasio was singing to me directly with “Everything’s Right.”

Everyone got down for “Possum,” which is a glow stick throwing fan favorite and the band threw together a super funky jam for “Harry Hood” before closing the set with “More.” The band returned for an encore of “Loving Cup” during a light drizzle which cooled off the hot Friday the 13th show. The second night of the Phish three-night stay in Atlantic City was the hottest of the days with temperatures in the 90s when the gates opened.

The band started a little earlier than the night before at 7:58 with some killer attire – Fishman’s doughnuts were glowing under the blacklight and Anastasio rocked a kitten photo on his hoodie.

Keyboardist Page McConnell crushed a solo for “Ya Mar” before the band really dug into the sand for a killer version of “46 Days,” with Anastasio on fire. The band really got into a fun and funky “Soul Shakedown Party,” and then played “Split Open and Melt,” and “The Squirming Coil” to close the first set.

Given the location on the ocean, the Atlantic City Beach Patrol was on duty throughout the event, allowing swimming during daylight hours and concertgoers were able to stand in the ocean up to their waists throughout the show, which is where I found relief during the set break.

People were really stoked about the first set, a lady came over and hugged and just said, “So good,” while others were sitting catatonic in the ocean. I managed to find my way to my exact same spot before the second set began at 10:02 p.m. and McConnell’s piano was dazzling for “Drowned.”

On a very spacey and jammy “Ghost,” Anastasio played a few bars from the Bruce Springsteen classic “Dancing in the Dark,” and following “Chalk Dust Torture,” the McConnell broke into “No Quarter,” which had the guy behind me saying, “I can’t handle Zepplin right now.”

The band played a really slow and funky “Slave to the Traffic Light,” before absolutely nailing “Suzy Greenberg” with mathematical precision. The encore began with “A Life Beyond The Dream” and then ended with “Tweezer Reprise” at 11:14 p.m. Sunday night was cool and familiar as I saw someone wearing a shirt proclaiming the adage “Never Miss A Sunday Show” as I walked through the gates. Posters again sold out within 10 minutes for the third night in a row.

The band kicked off the first note at exactly 8 p.m. with a slow start with “The Landlady.” Anastasio was on fire for “Scents And Subtle Sounds,” and the band crushed a brief version of “The Moma Dance.” The light show for this tour is incredible. Light designer Chris Kuroda has implement LED light bars that can spin 360 degrees as well as round clusters of LEDs, all of which can be individually controlled and are to incredible effect throughout the show and Sunday night’s lights were a force throughout the evening.

The band had an unbelievably uplifting jam on “Mike’s Song.” Throughout the evening, Anastasio was playing with the crowd where he was almost saying, “Oh, you like that, how about this?” “Carini” opened the second set at 10:03 p.m. with the band on fire. Page was acting like Dr. Funk on the keys throughout the second set and Anastasio was really going nuts for “Piper.”

For “First Tube,” Anastasio was running around like a guitar god and leaving it all out on the field – truly pouring every ounce of energy through his fingers into his guitar with the second set ending at 11:16 p.m.

“This is just magical. Thank you all for being here with us,” Anastasio said at 11:18 p.m. to begin “Fluffhead,” the first song of the encore. Fishman was feverish for this song and Anastasio and Gordon implemented more of their synchronized jump-dancing.

The band had everyone holding hands and singing for “Backwards Down the Number Line,” to close its stay in America’s Favorite Playground at 11:42 p.m. As people walked through the sand and onto the world-famous Atlantic City Boardwalk there was a lightness in the air.

Combining the lights with the incredible amount of sound that these four gentlemen can create on a stage is nothing short of spellbinding. I walked away from the show with a feeling that anything could be possible.