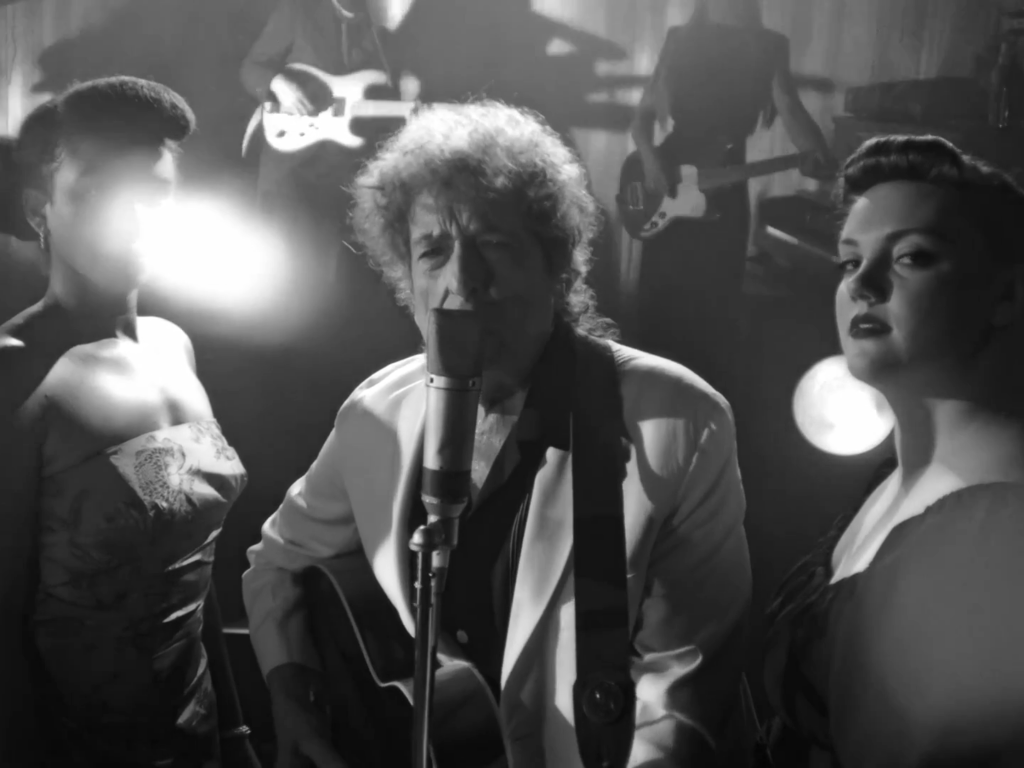 If there are two words that summarize Bob Dylan well, “Shadow Kingdom” fits the bill. The iconic artist is the master of the mysterious and shaping how he is seen by the public.

With the “Never Ending Tour” put on hiatus for only the second time since 1988, Dylan announced “Shadow Kingdom,” his first concert performance since December 2019 and since the release of “Rough and Rowdy Ways.”

“‘Shadow Kingdom’ will showcase Bob Dylan in an intimate setting as he performs songs from his extensive body of work, created especially for this event,” was all the information provided about the live-streamed event.

Sunday, July 18, Dylan unveiled his black and white film “Shadow Kingdom,” subtitled “The Early Songs of Bob Dylan,” on Veeps.com. For $25 viewers could watch live and replay through July 26 with no announcements on if it will be released again.

Dylan appears in a smokey jazz club with a masked band to kick off “When I Paint My Masterpiece.” He has his hat with a glass of most likely “Heaven’s Door” whiskey on a table next to him as he plays an acoustic guitar.

Between the masks and ladies wafting cigarette smoke that lingers around the room, the cinematography takes on the essence of Dylan. The accordion that is so lively on his most recent albums is heavy on “Most Likely You Go Your Way and I’ll Go Mine.”

The scenes change and so do Dylan’s clothes and the band changes from song to song. “Shadow Kingdom” was shot in 2021 in Santa Monica, California and directed by Alma Har’el. For 50 minutes, viewers are transported to the “Bon Bon Club” in Marseille, France.

Back in the club, for “I’ll Be Your Baby Tonight,” Dylan picks up the guitar and picks up the pace with the twang of a slide guitar. By the end of the tune, the camera zooms out to show people dancing in the club. The scenes change to another of Dylan’s favorite motifs, the cowboy kind, as he sits with some rough-looking folk for “Tom Thumb’s Blues.”

Dylan is lively and expressive throughout the performances on “Shadow Kingdom.” As he sings, he is pointing and very emphatic. The actors are all equally playing their parts as the camera does quite a bit of crowd watching for us. “Tom Thumb’s Blues,” one fella with the hat and the beard is really enjoying himself while the mustached man with the sarsaparilla seems to be lost in his thoughts.

When Dylan stands at the microphone in the small room, he is especially energetic. He barks the lyrics to “Tombstone Blues” like a street poet. Then, he picks up the guitar and strums into “To Be Alone With You.”

“What Was It You Wanted,” is from 1989’s “Oh Mercy,” and Dylan delivers it in the dark, singing in the shadows and his acoustic player sitting on the edge of the stage. Dylan is sitting on a stool with a harmonica in his hand and doing a lot of Obama-inspired thumb pointing. “Forever Young” is a Dylan classic – I think it’s one of his favorites and he is dimly lit in the shadows with his white cubit jacket was he sings earnestly.

For “Pledging My Time,” from my favorite Dylan album, “Blonde On Blonde,” he is playing to a 50s dance complete with paper chains and streamers behind the band.

Two of my favorite Dylan songs close the performance. “Watching The River Flow,” is delivered with rollicking fun as the band plays away. I wonder, are these his friends and not actors. If they’re actors, are they smokers or just acting? There is a lot of smoke in the room, kind of like a Dylan concert. The final song, “All Over Now Baby Blue” is completely enchanting and dramatic. It’s a song that Dylan knows inside and out since releasing it on “Bringing It All Back Home” in 1965.

With “Shadow Kingdom,” Dylan has changed the way I will look at concert films in the future. The magical performance not only highlights the best work of Dylan, but also captures his creative imagination and incorporates the imagery and lore of Dylan that will be added to his large and legendary body of work.