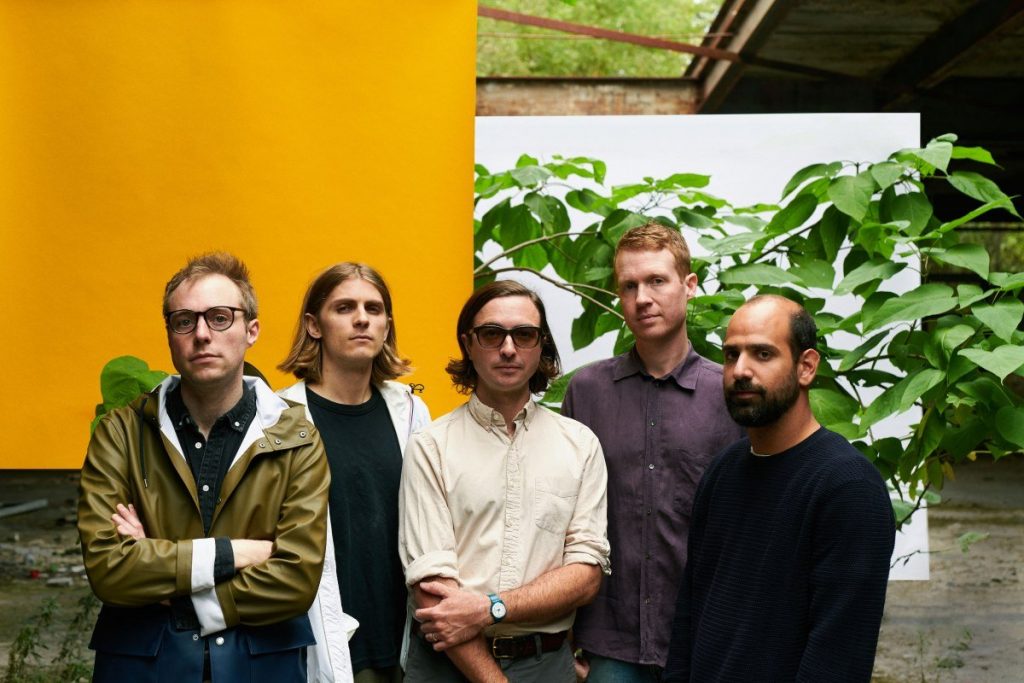 Real Estate has a warm, fuzzy aesthetic that reminds me of my favorite sweatshirt – a 2015 Dean Randazzo Cancer Foundation Paddle For A Cause hoodie.

Real Estate, the pride of Ridgewood, New Jersey, is back with the indie rock band’s fifth studio album, “The Main Thing,” released Feb. 28, on Domino Records.

The band rejoined with producer Kevin McMahon in the studio, who previously worked on the 2011 album “Days.” As with Real Estate’s last album, “In Mind,” the songs are about the complexities of daily life from the perspective of the members as they age into adulthood. Throughout the 13 tracks and 52 minutes, 27 seconds on “The Main Thing,” the band sounds open and up for an adventure; where guitar riffs sound like they’re walking along with us down this new path.

The album does have a newly familiar sound. For example, the track, “Also A But,” is the first Real Estate song written by Julian Lynch. The guitarist replaced founding member Matt Mondanile on “In Mind” after being accused of sexual misconduct from several women.

On “Also A But” and all of the songs on “The Main Thing,” there is a sense of Real Estate pulling in its listeners through the speakers and inviting them to join them on this journey.

Martin Courtney wrote the majority of the songs on the album, just as he did for the previous Real Estate albums. It’s a comfortable position for the singer and guitarist who keeps the band, bassist Alex Bleeker, Matthew Kallman on keyboards and drummer Jackson Pollis, jamming and in harmony.

The album opens with a synth that could be at home on an Atmosphere album but then it gives way to a warm progression of bass lines and drum rhythms. The result seems to blend the past Real Estate sound to the more ethereal present sound.

On the first single, “Paper Cup,” there is a feeling of longing that begins with a synth melody that fades into a muted guitar riff. The song sounds like it has roots in the Real Estate debut album 10 years ago, while it acknowledges that the world is moving pretty fast around it.

My favorite track on the album is “You,” which hits on my loves of jammy guitar riffs, nostalgic lyrics and harmonized hooks. The band sounds like they’re all in it together on the song, as they do across the entire album. There is a sense of brotherhood and collaboration that comes through as the band members fill in and fall in line on “You.”

Real Estate draws from that past for much of its lyricism while contemplating the future and that forces the band to push its production forward. The strings that punctuate “Falling Down” creates a feeling of levity on such a dense song that it almost blurs like the radiation swirling around the edges of a black hole.

“The Main Thing” is reassuring because even on tracks that I’m not in love with, I still like moments of and aspects of the songs. A track like “Also A But,” is not my favorite but I appreciate the spacey guitar solo on the bridge and it is a highlight of the album for me.

The title track is the type of feel-good unrestrained summer song that is meant for loud speakers and open windows. It builds like unbound energy stored up for the perfect moment of blissful creative execution.

There is a similar tension that builds on “Sting,” like anxious moments waiting backstage for the curtain to rise and the lights to hit. As an instrumental track, you can hear how the band members can push and pull off one another before launching into the rhythm for “Silent World.”

There are golden gems of wisdom that are served up like proverbs of fatherly advice. On “Procession,” the song has brilliant lyrics that are told like sitting in the passenger seat while your new friend takes you on a tour of their hometown.

“Well, the former generations
Tried to keep the dream intact
But I’ve always been impatient
It sweetens looking back”
-“Procession,” Real Estate

The album closes with the folky instrumental track, “Brother,” which begins with a 70s Joni Mitchell vibe before shifting into something a little bit darker and more ominous.

As humans band together across the world to help one another during the coronavirus pandemic, everyone is looking for comfort. For me, the soothing sounds of Real Estate are freeing from the uncertainty surrounding everything right now. There’s nothing better than turning on the familiar jams from a Jersey band putting out good vibes – that’s “The Main Thing.”