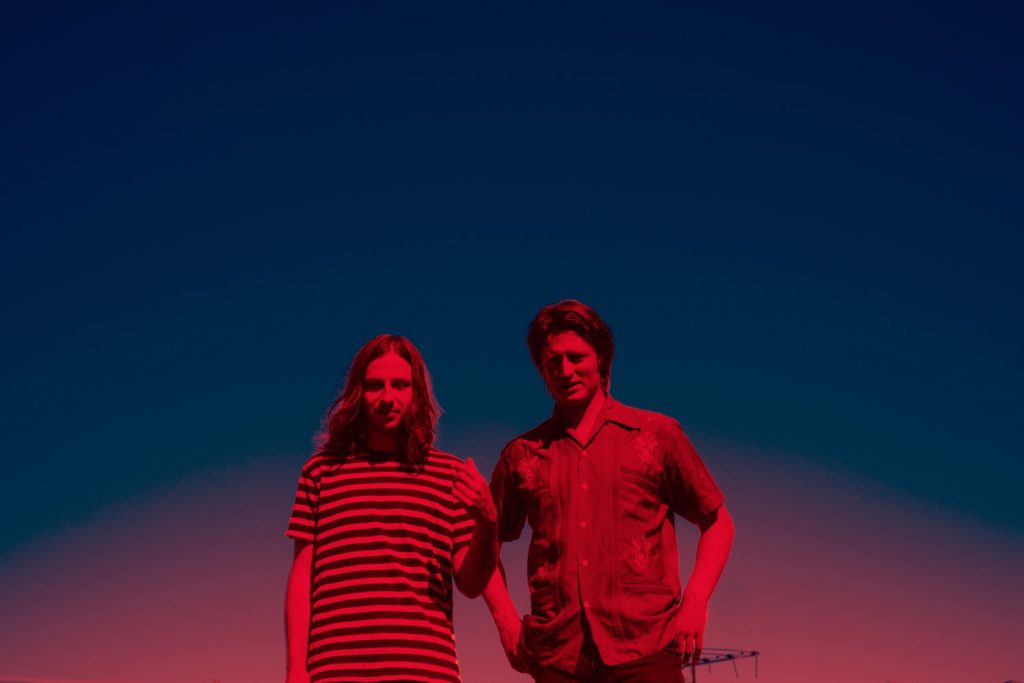 I’m not trying to brag or anything, but I’m known for having a good memory. But, I’m going let y’all in on a little secret, since we’re such good friends and everything, I know I can trust you.

I write a lot of stuff down. A lot of stuff. Most things, in fact. I have always said that writing is the only thing I’m any good at so I have to write as much as I can before I lose the muse.

I have another confession to make, since I’m in the confessing mood. I have no idea how or where I first heard of Mapache. I’ve had this word looking at me for a few weeks now. Somewhere, somehow, Mapache appeared and, well, now the time has come to write about it and I have no idea what it is. So, I hit the Duck machine and I get a picture of an adorable raccoon. Mystery, unsolved, Scooby-Doo.

Singer-songwriters Sam Blasucci and Clay Finch, who are definitely not raccoons but have their own degree of adorability, comprise the Los Angeles-based band Mapache.

Originally from Glendale, California, the duo’s plants its feet firmly in the golden sands on the beaches of the west coast. Blasucci and Finch harness the healing ability of the salty sea air to blend their harmonies in the same spirit that led the 60s folk revival.

Mapache’s sophomore album, “From Liberty Street” was released March 20 via Yep Roc records. From the opening acoustic chords and the boys’ warm vocals, I remembered exactly why I wanted to review this album. The band reminds me of all the things I love about bands like The Wood Brothers, Conor Oberst, Phantogram, Amos Lee and Andrew Bird and combines them into a hazy, laid-back jammy sojourn.

The album comes in at just under 40 minutes in 14 tracks, putting it near the pace of a punk album, but it meanders beautifully through tracks that clock in around the 3-minute mark leaving time for a delicate dusting of fingerpicking or a jam that lasts as long as an extended daydream.

“This record is about as close to the sound of home as you can get,” Blasucci said on the band’s website. “We recorded it with a bunch of our friends in the house where we were living in a neighborhood that we loved. It’s a family vibe through and through.”

From the opening track, “Life On Fire,” the duo sounds lighthearted and carefree as they blend harmonies with a country twang over the smooth acoustic melody. It’s clear from the outset that this is chillin’ music – on the beach, after surfing and around the campfire music.

They follow that up with the rollicking folk track “Read Between The Lines.” It’s the kind of track that blends bluegrass, Americana, indie rock, blues and folk and makes me think of a warm afternoon with a cool breeze blowing across the Old Pool Farm attending the Philadelphia Folk Festival.

The classic guitar sounds on “Me Voy Pa I Pueblo” perfectly compliment the song sung in Spanish by Blasucci, who served as a missionary in Mexico for two years after high school.

“Traditional Mexican music has always been an important influence on our sound,” he said. “With this record, we had more time than ever to dive into that world.”

There are two more tracks on the album that Blasucci sings in Spanish – “Me Da Muerte” and “Igual.”

“Writing and singing in Spanish was also reflective of life on Liberty Street,” Finch said. “Mexican culture and music are intertwined into the fabric of the neighborhood and shaped our experiences living there.”

The duo gets help from fiddle player Sara Watkins on the beautiful “Cactus Flower.” The domestic lyrics point to a longing for slowing down in spite of all the traveling and time spent on the road by the musicians but willing to go anywhere for love.

The group of musicians that migrated in and out of the sessions “From Liberty Street” were herded by producer Dan Horne.

Poking fun a the campfire cowboy songs, Mapache roasts the tropes on “Cowboy.” The song questions what is it that makes up a cowboy – the hat, the sleeping under the stars – and creates a sonic dusty trail for the boots to walk.

The sparse instrumental song “Liberty Street Blues” jams. If you close your eyes, you can almost feel the warm sun on your face and feel the sand between your toes as you soak in the tranquil track.

The darkest sound song on the album is “Coyote,” which has a heavy Simon and Garfunkle vibe courtesy of Farmer Dave Scher’s moody melodica.

The band encapsulates sweaty summer love on “Cherry Barb,” which just feels like a song that should be played around the Perkimomen Creek which runs along the campground at the Philadelphia Folk Festival.

“To Play For All Of You” brings the life on the road into the studio:

“To play for all of you
It’s a dream come true
No matter where we are
Travelin’ near and far
All the road and the places we go.”

“From Liberty Street” closes with the revival song “I Just Steal Away and Pray” by Albert Brumley and often covered by country, gospel and roots bands. The boys do their darkest to put their soul into it and the good lord has rewarded them with an emotional closing track.

Life can hand you surprises – whether it be a trash panda lounging in the moonlight atop the neighbor’s chimney or in the form of a note written months ago – you just have to look for the signs and sometimes remember where you put them.

Mapache’s latest album will steal your heartstrings and sell them back to you on the road “From Liberty Street” to your ears. The album contains the feeling of a travelin’ band rambling from stage-to-stage while having a cozy, comforting tone from start to finish.

Mapache is at the top of my list of bands to see post-pandemic.