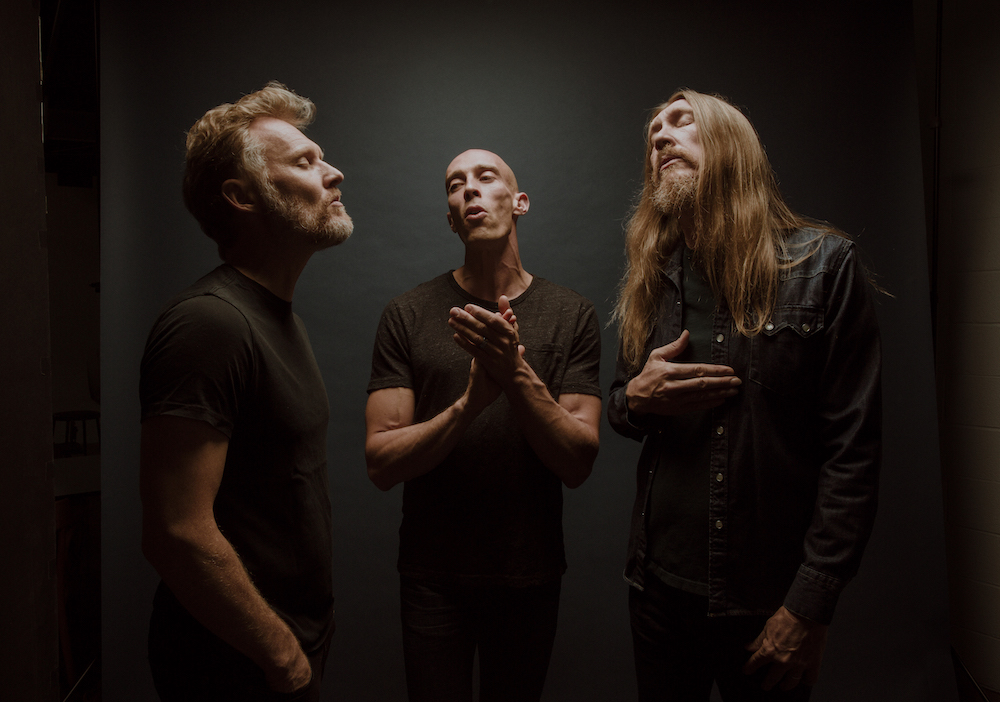 Folk-rock trio The Wood Brothers channel its freewheeling spirit into a focused force of imagination on the band’s seventh studio album, “Kingdom In My Mind” released Jan. 24 on Honey Jar and Thirty Tigers records.

I saw The Wood Brothers, back when it was just Chris and Oliver, open up for Bruce Hornsby Oct. 10, 2009 at Trump Taj Mahal. I also got to see the band play at the Philadelphia Folk Festival in 2011 and 2016. In 2018, the band’s album “One Drop Of Truth” was a Billboard chart-topper and earned the band its first Grammy nomination for Best Americana Album. Throughout the 38 minutes and 34 seconds on “Kingdom In My Mind” The Wood Brothers weave tales of love, life and death, putting each in perspective independently and accepting each for what they are. Just as the band is not restricted to one genre, its members sound loose singing and playing at their own space – The Studio Nashville.

The album has a loose and jammy feeling that usually happens naturally when the band is having fun playing live. There is also an exploratory tone to their sound – seeing how far each band member can push themselves. Led by singer and guitarist Oliver Wood, the band is free to experiment behind his steady hand.

Chris Wood’s double bass has always been the foundation of the band’s sound, but his singing and especially harmonica playing on songs like “The One I Love” is allowed to galavant effortlessly.

Jano Rix, the multi-instrumentalist known for playing his homemade stringed-percussion instrument, the shuitar, kicks up the beat on the drums as well as adding dashes of brilliance across the keys and warming backup vocals.

Beginning with the jazzy and jammy “Alabaster” about a woman who leaves home for New York City, declaring her independence through the song’s lyrics. The song hits heavy on the jazz notes while it romps around in the territories of folk, rhythm and blues, and Americana.

The band shows off its folksy roots on “Little Bit Sweet.” It has the same spirit as the earlier songs by The Wood Brothers but is tighter and better produced than the tracks on the band’s 2008 album “Loaded” released on Blue Note Records.

The album takes its title from the bluesy “Jitterbug Love,” with Oliver Wood playing the slide guitar as an extension of the soul. It’s songs like this one that translate The Wood Brothers’ captivating live performance and energy for this album.

The smart and personal storytelling that first made me a fan of the band has only gotten better over time. One of my favorite songs on the album is “Cry Over Nothing,” which takes a pithy idea and turns it into a burning blues sermon.

Those Americana roots are clearly on display on this album on tracks including “Little Bit Broken,” “The One I Love” and “Satisfied.” It’s no wonder why I gravitate toward those songs first, because they sound so familiar to The Wood Brothers that I’ve listened to for the better part of a decade.

More than its other albums, The Wood Brothers have exposed more of gritty, raw energy that drives the band on “Kingdom In My Mind.” A song like “Don’t Think About My Death,” displays how developed that new sound is and it is one of my favorite on the album.

“There’s a bible in the drawer
There’s a highway out the window
There’s another road I should be traveling
I’m not gonna get very far tonight”
“Don’t Think About My Death,” – The Wood Brothers

One song that contains two parts of a broken-down blues track is “Little Blue,” which gets a reprise at the end of the album. You can hear the band members having fun on the track and see how it can easily be converted into a barn-burning live track.

While “Kingdom In My Mind” explores the musical realms that The Wood Brothers wander, the album ultimately has the fable-like quality of a feel-good resolution. The album will send new fans back into the archives for older recordings and old fans can find comfort while wondering where the band will go next.

See The Wood Brothers with Saturday, July 25, 2020 at the
Stone Pony Summer Stage in Asbury Park, New Jersey and Sunday, July 26 at Skyline Stage at the Mann in Philadelphia, Pennsylvania.

Get “Kingdom In My Mind” from Amazon, Apple Music, Google Play, Spotify, Tidal and Deezer.