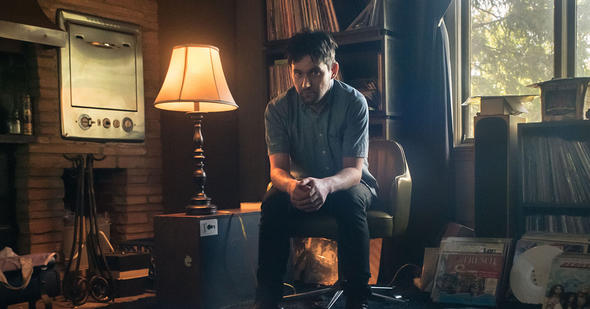 The sharp sting of winter air hits me before sunrise each morning. I’ve listened to the latest Conor Oberst album at least a dozen times during the past month during those predawn hours. It’s the most depressing, lonely and brilliant confessional that he’s released to date. With headphones and coffee, Oberst has kept me company, and also questioning, during morning writing binges and it’s now it’s time to dissect “Ruminations.”

Oberst is a word sculptor. He pulls layers of everyday emotions and manipulates them into heartbreaking and compelling songs. The singer-songwriter concentrates the essence of his feelings into raw, uncomfortable and relatable terms that are undeniably emphatic. His latest album now stands alone as his greatest masterpiece.

Listeners are welcomed into Oberst’s psyche in a way like never before on “Ruminations,” released Friday, Oct. 12. The musical production, as well as many of the instruments that accompanied his recent albums, have been eliminated here, but that empty space is filled by a now connection between Oberst with his audience.

Despite being vocal about his discomfort with the attention that comes with fame, Oberst has been prolific with Bright Eyes, which has released nine albums between 1995-2011. During and after that period, he’s led Conor Oberst and the Mystic Valley Band, Desaparecidos, and performed with Monsters of Folk. Both as a solo performer and with a band, Oberst created an open door into his personal struggles.

Oberst’s songs spark whimsical curiosity using a combination of everyday imagery, surrealism and folk storytelling. There is no underselling the humanistic element that anchors Oberst’s songs and presents him as just a regular guy with some problems that he needs to express. By telling deeply personal stories projected by his fragile voice, Oberst creates an emphatic connection with his audience. If Oberst was my friend, I’d definitely give him a call to check in on him.

Oberst frequently creates the illusion of him sitting alone and pouring his heart out into his songs, but it has never been quite as effective as it is on “Ruminations.” On the seminal Bright Eyes album “Fevers and Mirrors,” Oberst ends the stark solo piano song “When The Curious Girl Realizes She’s Under Glass,” with the sound of him getting up from the piano and leaving the room. It’s a trick that puts the listener standing right on the wooden floor completed by some added production with background noise from what sounds like an old house.

It’s not just the sound effects that make the track sound real, but it’s Oberst’s openness about drugs and depression when he howls, “But no matter what I would do in an attempt to replace, All these pills that I take, trying to balance my brain.” On the next track, “Haligh, Haligh, a Lie, Haligh,” goes deeper: “And I sing and sing of awful things, The pleasure that my sadness brings, As my fingers press onto the strings, In yet another clumsy chord.”

Those feelings have not left Oberst since he was a teenager in 1999, they have evolved 15 years later on “Ruminations.” Each of the 10 tracks sounds like Oberst singing alone in an empty room with a piano, guitar and harmonica. When Oberst opens the window to his soul, incredible, profound and emotional songwriting pours out.

After living in New York City for nearly a decade, Oberst returned to his hometown of Omaha, Nebraska to recover from a combination of “laryngitis, anxiety, and exhaustion” suffered while on tour with Desaparecidos in October 2015. Music is a therapeutic muse- both for the artist and the audience.

“I wasn’t expecting to write a record,” Oberst told Nonesuch Records. “I honestly wasn’t expecting to do much of anything. Winter in Omaha can have a paralyzing effect on a person but in this case, it worked in my favor. I was just staying up late every night playing piano and watching the snow pile up outside the window. Next thing I knew I had burned through all the firewood in the garage and had more than enough songs for a record. I recorded them quick to get them down but then it just felt right to leave them alone.”

He recorded the album at ARC Studios, which he built with Bright Eyes cofounder Mike Mogis, who also mixed this record. These 10 songs released on “Ruminations” are the most honest he’s ever been with his audience. They aren’t overtly political or protesting; they’re the reflection of the world created by the flames of a fireplace dancing against the frostbitten windows of Omaha.

With five rapid chords pounded out on the piano, Oberst launches into the first track, “Tachycardia,” and paints the scene: “I’m a stone’s throw from everyone I love and know, But I can’t show up looking like I do.” Though a lonely melody and an exasperated harmonica, Oberst dives right in. He references the depression he felt during a 2014 case where a woman falsely accused him of rape and then describes his reflections of the world which include a suicidal cafe waitress.

On the second track “Barbary Coast (Later),” Oberst is honest about his struggles with sobriety the comfort he finds in living a life of constant motion. He sings: “I might have a taste cause the first one’s free, And the checkout girl’s got a thing for me, And they’re both as sweet as the day is long – I don’t wanna feel stuck, baby, I just wanna get drunk before noon.”

Oberst continues his revelations to the next track, “Gossamer Thin.” He tells a story about drug and alcohol abuse, recovery and relapse from the perspective of a performer with depression to the tune of an upbeat melody. From opening lines about a musician addicted to heroin, he continues to describe the daily struggle as he sings the bridge: “Now I walk around in some kind of altered state, The drink in my hand is starting to shake, I get used to it if it has to stay this way, A new bunch of flowers I’ll have to arrange”

“Rings ’round his eyes
Tracks down his arm
His fans are confused and his friends are alarmed
His wife doesn’t talk
Hates when he’s gone
Counts every skirt in his new entourage”
– “Gossamer Thin,” By Conor Oberst

If the album has made the listener feel uncomfortable at this place on the album, Oberst completely opens his soul on the fourth track, “Counting Sheep.” It deals with mortality from the perspective of being in a hospital bed watching television news coverage of the deaths of two children. Somehow, Oberst’s lyrics weave his fears and desires into a comforting blanket of emotion. With the steady fingerpicking of his acoustic guitar, Oberst says that he is trying to hold it all together. But, who’s affirmation is he seeking when he sings: “especially you?”

As a master of the metaphor, Oberst relates to the story of Frank Lloyd Wright’s efforts to rebuild his home after the tragedy. He alludes to the story of a servant who killed Wright’s girlfriend Mamah Borthwick and six other people with an ax, and then set fire to the couple’s home. Using this, and a slow progressive acoustic scale, Oberst relates his career to that of Wright, who went into debt while rebuilding the home, twice, in an effort to preserve his reputation.

Oberst reflects on his journey from growing up in Omaha to how he ended up back home writing “Ruminations” on “The Rain Follows the Plow.” Oberst tells how he tries to use his depression and anxiety to produce music, but it’s never as fulfilling as he would like it to be. He does this using a common misconception about homesteading leading to fertile crops in the western part of America as his allusion. It serves as the climax of the album because he realizes that despite rebelling the traditions he learned as a boy, he found the original path he was meant to follow.

The most topical song of the album, “A Little Uncanny,” rolls through nearly 40 years of history that includes references to the Vietnam War and the Cold War. Oberst name drops Christopher Hitchens, Oliver Sacks, Robin Williams, and Sylvia Plath and uses these references to reflect on the irony of history.

While Oberst has you on the ropes, he inserts a song about someone making a next of kin call after a fatal car crash. This may be the most accessible song on the album that takes you through his thought process from the conception of the song through its completion. His perspective throughout the song shifts from the guy passing by the car crash, to a widower, to a musician struggling with fame and finally the narrator walking home after getting into a fight with his girlfriend in New York City.

On “You Loved Him Once,” Oberst lifts the lines from “Julius Caesar” by William Shakespeare: “You loved him once, not without cause.” On this track, he sounds hurt that his fans turned on him and didn’t support him when he needed him. He vents as an artist feeling the need to support his fans that are asking more of him when he feels that he has given them enough.

Oberst closes the album with a song about an alcoholic waking up and going to the bar on, “Till St. Dymphna Kicks Us Out.” St. Dymphna has a double meaning – it’s the name of a New York City bar that formerly frequented and it is also named for the Irish saint for mental illness. The narrator’s friends are happy to feed his habit but he’s having an internal struggle. Does he turn his back on his loyal drinking friends or does he finally face facts?

“Ruminations” means to meditate on, often repeatedly. With his latest album, Oberst repeats the stories that he is hearing on sleepless nights and then rehashes those themes to his listener. The 10 songs on “Ruminations” are easily the most authentic he has ever written and sound refreshing in a world that leans toward a superficial status quo and music that relies on electronic production.

The most interesting experience of listening to “Ruminations” and writing this blog is how lines from the album replay in my head days after hearing them. They appear with little warning like memories of old friends and remind me that reflection is an integral part of understanding perspective.