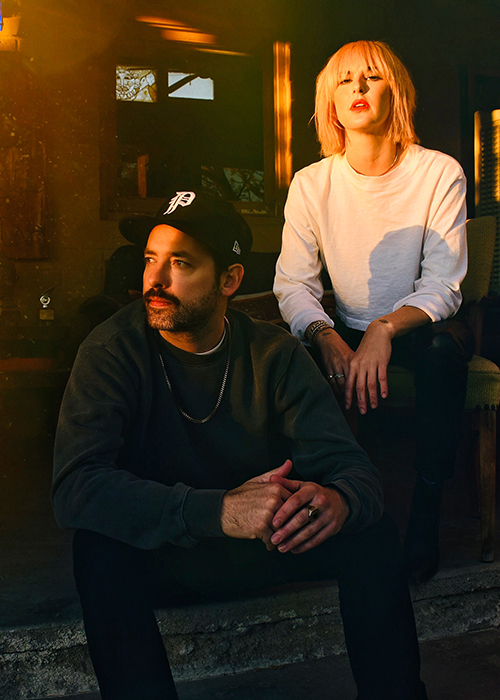 Have you ever seen the big old vases in a museum that have been repaired with gold? I’m vaguely familiar with the Japanese concept of Kintsugi 金継ぎ. By fixing ceramics using this method, the repair becomes part of the history of the piece, and the cracks are honored, not hidden.

I tend to lean into musicians that show the frayed edges around their work and their process of creation or those who are willing to experiment outside the norm. Sometimes it’s the artist trying to surprise the listener and other times there is an element of discovery that finds me digging into the background songs or the history of what happened in between takes.

I’ve always loved the gritty approach to pop that Sarah Barthel and Josh Carter take with the music they create for Phantogram. By combining electronic, funk, hip-hop and alternative rock influences, the band has mastered that art for its fourth album, “Ceremony” released March 6, via Republic Records. Following the band’s successful third album “Three” released in 2016 and moving from New York City to Los Angeles, Phantogram sounds unrestrained and pushing the limits of its sound into psychedelic, avant-garde territory.

Throughout the 37 minutes and 27 seconds that are divided amongst the 11 tracks closing with the title track, the album sounds like a process of letting go. There is a sense of comfort in knowing that there is no turning back and as the band and listeners move through the songs, there is a feeling releasing a burdensome tension.

The album switches styles as if Barthel and Carter are pulling in whatever influences move them and interpreting through the Phantogram machine for each song.

The album opens with the heavy pop track “Dear God” that sets a bass-heavy tone for tracks that follow. There’s also a gritty, do-it-yourself sound that comes through on the opening sample and that picks up on the next track “In A Spiral.”

The gritty, chopped-up electric beat that serves as the bed for “In A Spiral” works perfectly with the lyrics about diving into Internet memes and endless feeds. The song resonates now more than ever as people are using social media more to connect to the outside world during the pandemic.

There’s a dreamy yet depressing track “Into Happiness” is the first on the album that deals with the death of Barthel’s sister due to suicide, which occurred prior to the release of “Three.” The chorus is sung with a sense of longing on the last lines “you’d make it perfect.”

I love the fuzzy, deep bass that carries “Pedestal.” On what is probably the happiest track on the album, it opens with the vivid line, “you can make a hospital lovely,” and takes a warped trip down the corridors of the image and self-reflection.

The synths on “Love Me Now” immediately set the dark vibe for the track. The track mashes up so many styles, beginning with the hip-hop and house tones, to the emo verses and the epic 80s-inspired guitar solo by William Patrick Corgan – it’s my favorite on the album.

The album shifts phases again for the following track, “Let Me Down,” which begins as an alternative rock anthem and then morphs into a techno-inspired psychedelic rock song, which itself becomes muted.

Beginning with “Let Me Down,” the album takes a different, darker, weirder path. The song is dark and warped, taking a whispered vocal and incredibly fuzzed-out bass line that sounds inspired by TV On The Radio.

With “Mister Impossible,” a theatrical melody plays beneath Barthel singing in classic style and then the song breaks into an alternative rock track led by Carter’s husky baritone and that pulls in listeners with those house-inspired beats.

Barthel’s vocal range takes center stage on “Glowing,” a starkly produced song that appropriately gives her room to breathe with minor piano and synths. It’s about as stylistically different as you can get from any other track on “Ceremony” and yet it fits quite nicely among the collection.

The-Dream brings his hip-hop flavored take on pop for “Gaunt Kids” which is a total sleeper track. While Barthel speaks some of her vocals in an 80s rap, she drops it for an incredibly folksy bridge that lifts the spirit of the song to another level.

Closing with the whimsical title track, “Ceremony” doesn’t fade away as much as it saunters into the sunset. It’s like a choppy retrospective of the entire album that snuggles in the warm synths, grinds against the choppy exterior and hits the spacey highs that the album reached.

While pushing its creative bounds, Phantogram has plenty of room to bask in the glory of the muted reverb throughout “Ceremony.” The album shows how beautiful unrestrained emotion can be when channeled through a positive outlet.