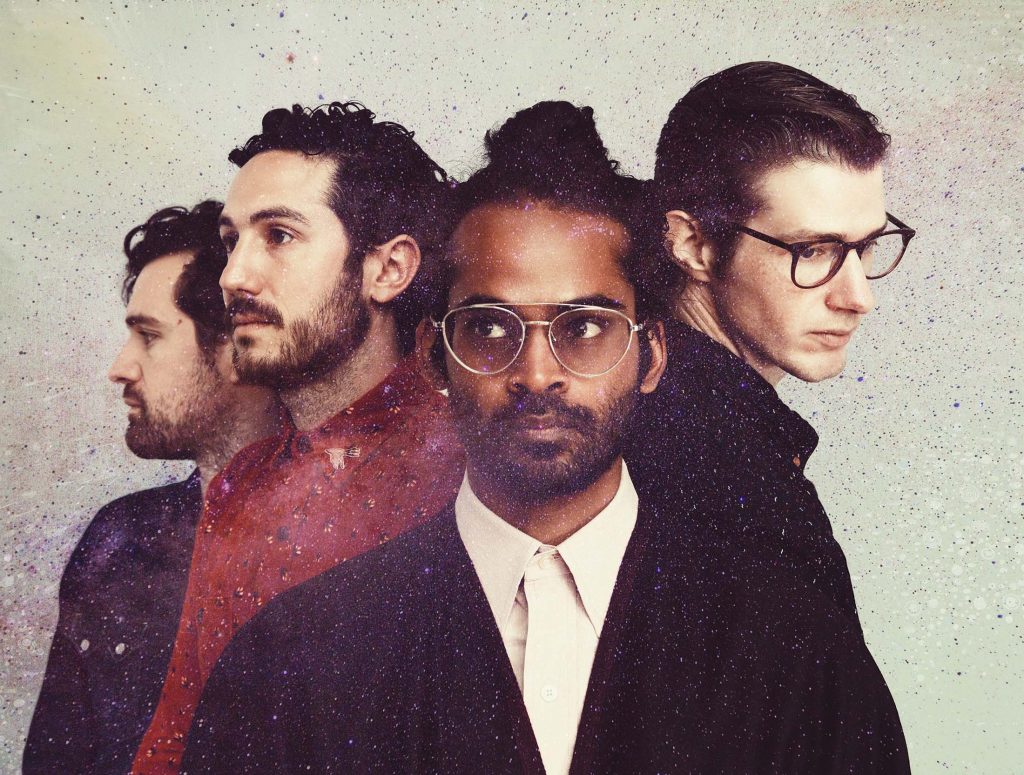 When a song strikes just the right chord, it builds an empathic connection between the musician and the listener. Darlingside establishes that bond better than any band I’ve heard recently.

The band layers exquisite harmonics throughout the album spanning 39 minutes and 28 seconds across 12 tracks to create a range of warmly rich sounds. Standing around a single microphone, the bandmates blend their voices in heartfelt chorus. Some of the band’s songs, or moments of songs, have a classic, folk-rock sound similar to Crosby, Stills, Nash and Young.

The Darlingside sound is experimental folk-rock that doesn’t color inside the lines – the band just plays what sounds right. Because the band sounds so earnest and the songs have meaningful lyrics, there is a sense of building a soulful universe around the album.

I saw Darlingside perform in 2016 at the Philadelphia Folk Festival, where the band members showed offer their serious musical chops in addition to the creating a unifying feeling across the festival grounds. Playing “Harrison Ford,” the breakout single from “Birds Say,” helped balance their depth with humor.

“Extralife” begins with the title track as an introduction that sets the tone for the album. It has a post-nuclear feel in addition to touching on the science fiction and fantastical worlds. The imagery includes a sunken flag, flattened earth, fiery flowerbeds, mushroom clouds and a superconductor in the sky.

“Singularity” is a pastoral folk song that has elements of bluegrass sewn throughout. One of my favorite lyrics on the entire album begins the song and is repeated as a vocal bridge: “Someday a shooting star is gonna shoot me down, burn these high rises back into a ghost town.”

The song “Futures” slowly builds the modern folky yearning of a Band of Horses or Fleet Foxes song, including a circular guitar fingerpicking and lyrical patterns. It ends with an intricate instrumental breakdown.

Some of the slower, more methodical orchestrations fit beautifully on “Extralife.” The horns on “Hold Your Head Up High” compliment the quiet atmosphere the song builds from the opening chords.

As a fan of David Foster Wallace’s “Infinite Jest,” I think “Eschaton,” borrows its name from the role-playing nuclear war game played out on the courts of the book’s tennis academy.

“Eschaton” has a futuristic pop sound that builds steam as it builds to an uplifting refrain. I love how it nods to the novel with the standout line “They’re building martyrs out of the tennis stars,” and how the spacey sounds are grounded with a violin as the song closes.

“I hear the Eschaton
I see our stripes on floating ground
No matter what we’ve been
We are the upshot now.”
– “Eschaton”- Darlingside – “Extralife”

“Extralife” is technical in its composition but makes room for simple and incredible moments. There is is something easy and beautiful about the repetitive chorus of “Indian Orchard Road” that makes it sound better each time I hear it.

Rita Hayworth gets a 50-second tribute that is more like a poem than a song – with the memorable line- “Oh I wanna know what it’s like to be loved.”

The album ends with “Best of the Best of the Times,” which sounds as though it achieves some sort of supernatural sonic singularity the way it slowly fades in and then repeats in reverse to close.

While musical bridges create some of the most magical moments on “Extralife” as much as the vocal arrangements, but on “Best of the Best of the Times,” the bridge is the domino that sets in motion for the climax of the song.

The video for “Best Of The Best Of Times” directed by Chris Fleming and starring Dave Child is so whimsical and creative that it really puts me in a positive mood every time I watch it.