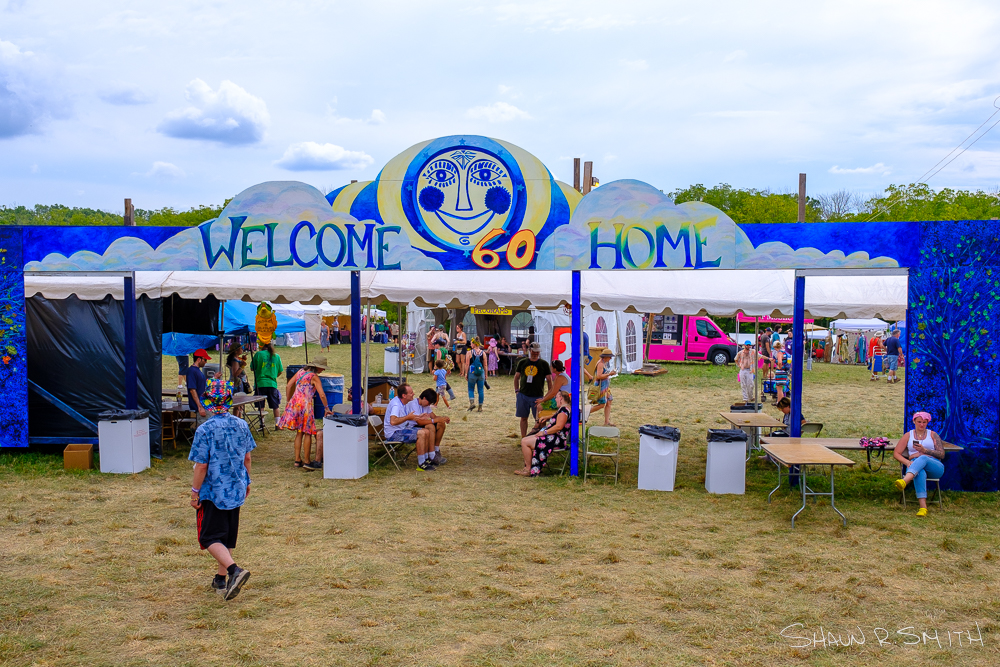 There is a cultural oasis that blooms annually in Upper Salford Township,  just outside Harleysville and Schwenksville, Pennsylvania. Thanks to the dedication of the Philadelphia Folksong Society and a thousand-plus pack of volunteers, the Philadelphia Folk Festival presented its 60th annual event this past weekend.

For four days each year, the Old Pool Farm, which is a working 84-acre farm located in the mountains and just along the Perkiomen Creek, is transformed into a folk music retreat.

Founded in 1962, the Philadelphia Folk Festival has been the longest continuously running outdoor music festival in North America and transformed into two years of virtual events with last year’s being celebrated as the 59 ½ anniversary.

For its 60th birthday, the festival went back to its pre-pandemic ways of hanging out on the hill as it welcomed tens of thousands of music lovers and more than 5,000 happy campers Aug. 18-21, 2022.

The theme for the weekend was Welcome Home and the farm had the same cozy feel as it always had once festival goers stepped through the hand-painted front gates.

Having been to the festival every year since 2008 and covering the festival for The High Note since 2012, I knew that it would feel good to see my old friends and get my feet dirty again. I just didn’t realize how quickly I would see them and how good it would feel.

The first friend I found was Kim Ryon, owner of Rain Florist in Ventnor who volunteers with the security committee for the festival. She helped me find my way to my press credential and made my way to the Camp Stage.

I walked through the campground and stopped by the Skippack Lions Club stand for a slice of tomato pie and a rolled cheeseburger and saw some of the sights.

Then, I caught up with my old friends and former podcast guests Mohsen Amini and Graeme Armstrong from the Scottish folktronic dance band Talisk, who introduced me to their new fiddle player Benedict Morris, before they closed out the show Thursday night on the Camp Stage.

The Thursday night concert is the thing I look forward to the most at the Philadelphia Folk Festival. Even if you are not camping, it is worth paying for the camping wristband just to see the show.

The festival got off with a roaring start thanks to the sister-led band Screaming Orphans from Donegal, Ireland whose drummer and singer Joan Diver led the crowd in a refreshing rendition of “Happy Together” by The Turtles.

After the soulful J and the Causeways took the stage, campsite favorite Electric Man had the spotlight to show the crowd the magic he creates with his suit of instruments.

I was able to see Justin Nordell, the very visible executive director of the Philadelphia Folksong Society who somehow is next to or on stage for every act. I got the chance to thank him personally for putting on this year’s festival and bringing Hiss Golden Messenger to the event.

Of course, the fest for me is just about as much as new connections as old because it’s as just as Talisk was going on stage when I met Mike McKenna Jr., a singer-songwriter from Cape Breton Island, Nova Scotia, Canada.

Morris got a proper introduction to the festival with a hopping hill of Celtic music lovers who were in a tizzy over Talisk. One of the highlights was one enthusiastic woman who yelled “Yay new guy!” at the fiddle player as Amini introduced the band’s encore.

My first stop Friday was to see my new friend McKenna Jr. perform a Wheel Decide workshop on the Craft Stage, where audience members spin a wheel of topics for the performers to fit into their set. He was there with Sarah King, Rob Lincoln and festival favorite Jackson Pines.

Under a scorching summer sun, which saw the fully-costumed Polish American String Band perform on the Camp Stage at 3:30 and then on Martin Guitar Main Stage at 4 p.m. the festival grounds were alive with excitement spread out across seven stages.

Luckily Yards Brewing Company and its security guard Scott were providing ice cold cans of Loyal Lager, Philly Standard, Level Up and Heritage Surf IPA, the latter is named for Heritage Surf and Sport, which has a location in nearby Margate City as well as locations in Ocean City and Sea Isle City.

The beer tent is always great place to catch some shade and thanks to the improved sound system made listening to Crys Matthews perform a breeze.

Talisk once again lit up the Martin Guitar Main Stage and with a new lighting system as well as a general admission standing pit located center stage, the hill was completely alive.

As if to highlight the diversity of the weekend’s performers, the next two performers to close out the night’s concert were soulful roots band Dustbowl Revival and folk variety act American Acoustic including Punch Brothers, Watchhouse and Sarah Jarosz.

If my main driver for attending the Philadelphia Folk Festival every year is the Thursday night concert, at least Friday keeps me around long enough for the Pancake Break-Fest hosted by the Lower Frederick Fire Company.

The $10 all-you-can-eat fundraiser even includes a wagon ride to and from the festival and according to some intrepid reporting, the record is six plates of a stack of three pancakes but I didn’t confirm if that also included the three links of sausage.

Gassed up with pancakes I was ready to once again hit the hill to catch the Fabulous Folkies workshop, featuring Tom Rush, Happy Traum and Jim Kweskin. The former, who is one of my festival favorites, opened up the Saturday evening concerts on the Martin Guitar Main Stage.

This year, our group of campers shrunk to its smallest number since I have been going since 2008. My good buddy Paul Dixon joined us and since so many people in the overall group dropped out for one reason or another, Jess and Loraine got a hotel and hung out on the hill every day and night.

It was great to hang out with them because it is the people, my fest friends, that make the whole trip worth making year after year. To get huge hugs from them all and to hang out with Jess and Loraine night after night was the best part of the weekend.

The one act that I was sad to miss was Atlantic City’s own and former podcast guests Originaire who played a Burn the Boats workshop in the Lobby Tent Saturday afternoon.

But, I always find a way to meet new fest friends as well and sometime around when the Lee Boys were performing I ran into McKenna Jr. at the artist signing booth and asked him to be on the podcast.

In addition to fest friends, there are always new bands that I find to fall in love with and the South Korean folk-pop band ADG7 completely transformed my festival experience. This is the kind of band you can really only truly encounter at the Philadelphia Folk Festival.

I was able to see vocalist Hong Ok during the band’s artist signing and secure a podcast interview with the help of festival publicists Danielle Dror and Milly Parker from Victory Lap Media.

From ADG7 to hip-hop group Arrested Development, who had the crowd nostalgic for the 90s era music, to the closing act Michael Franti and Spearhead, the diversity was on display performer after performer.

I had seen Michael Franti and Spearhead years before at the Dave Matthews Band Caravan when it came to Atlantic City in 2011 but his performance at the 60th annual Philadelphia Folk Festival was transforming.

I heard that he was walking around the campground but he confirmed that he put on a show for the Groundz crew who build the stages and sets every year. During the show he encouraged the kids to jump into the photo pit for a better view and brought 8-year-old Kaylie onto the stage to sing with him and gave her his hat to wear.

Franti walked into the crowd to sign, signed the stage and then took photos and signed autographs for the crowd well into the night.

On Sunday morning, the Gene Shay mural by the Craft Stage was shining brightly. I saw former festival director Lisa Schwartz at the ADG7 performance at the Lobby Tent, which was more rocking and intimate than the previous night’s show.

Later in the evening, got a chance to thank Schwartz for everything that she did to make every festival that I have been to the best possible throughout the years. From hugs at the camp stage to checking in on me at the beer tent (always a good place to find me) during a thunderstorm, she is the Folky Godmother of the festival.

After their performance, I interviewed Ok and ADG7 leader Kim Yak Dae and then McKenna Jr. for the podcast with again thanks to Dror and Parker who found me the quietest interview space I have ever encountered at the festival. McKenna Jr. is actually friends with former podcast guest Dave Gunning making Canada seem even smaller than I ever imagined.

Some clouds helped cool off the hill by the time Martin Stage Melee winner Emily Drinker took the stage. After Livingston Taylor I saw McKenna Jr. again and convinced him to hang out in the beer tent for Aoife O’Donovan and Bettye Lavette until it closed. Then, I hustled down the hill to take photos of Hiss Golden Messenger.

Down in the photo pit, I ran into my old photographer friend and former podcast guest Lisa Schaffer who is always delightful and also has captured some incredible moments at the festival throughout the years. You can catch her work on Instagram.

A light drizzle coated the farm as War and Treaty closed out the concert and sent some festival goers back to their cars to head home while others went to their campsites to keep the party going until well into Monday morning.

From its beginnings featuring Pete Seeger in 1962 at Wilson Farm in Paoli, Pennsylvania to the live streams and on-demand videos that are accessible online through the end of the month, the Philadelphia Folk Festival is the best-kept musical secret in North America.

Get digital access to the festival through the end of the month here.

While you’re at it, consider becoming a member of the Philadelphia Folksong Society.

Keep the fest alive until next year!