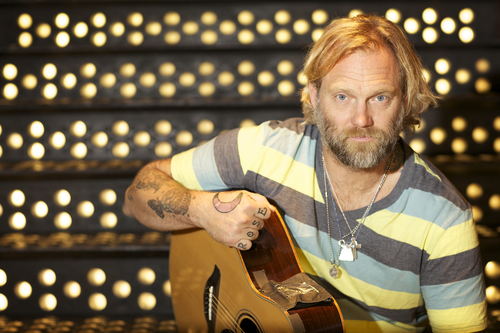 Of the 40 to 50 songs that Anders Osborne wrote for “Spacedust and Ocean Views,” only 12 made it onto the album released Friday, March 18. The blues and rock guitarist and singer-songwriter tapped engineer Mark Howard to help him produce, and Osborne also brought his friends to join him in the studio. “Spacedust and Ocean Views” is the 12th album by Osborne, who teamed up with the North Mississippi Allstars for an album last year and turned to a Pledgemusic fundraising campaign to release this one. Osborne’s live energy is toned down and the singer adapted a personal tone on this album where he plays acoustic guitar on most of the songs. Get “Spacedust and Ocean Views” from Anders Osborne, iTunes and Spotify.

The traditional fingerpicking acoustic guitarist Glenn Jones follows up on his incredible 2013 album “My Garden State” with “Fleeting,” recorded in Mount Holly, New Jersey and released Friday, March 18. Jones plays the American Primitive Guitar style invented in the 1950s by John Fahey. Jones is truly a master of the guitar, inventing tunings and creating his own partial capos to achieve the sound he needs to tell a particular story. The song “In Durance Vile” was written to accompany three poems written by artist Wassily Kandinsky and two songs are dedicated to guitarists Michael Chapman and Robbie Basho. Jones will play a free show presented by Bowerbird Friday, April 15 at The Rotunda in Philadelphia, Pa. Get “Fleeting” from Thrill Jockey, iTunes and Spotify.

Damien Jurado  – “Visions Of Us On The Land”

Iggy Pop is still doing things his way. The unique leader of the Stooges who helped challenge punk rock music released his 17th studio album, “Post Pop Depression” Friday, March 18. Pop recorded the album in secrecy under the production of Josh Homme of Queens of the Stone Age, and features Homme and fellow bandmate Dean Fertita as well as Arctic Monkeys drummer Matt Helders. The nine tracks on “Post Pop Depression” sound like they were the result of necessity. Pop has something to say on this album filled with imagery of death, emptiness and anger. He says “I’ve nothing but my name,” at the end of “American Valhalla.” See Iggy Pop and Josh Homme Friday, April 15 at the Kimmel Center for the Performing Arts in Philadelphia, Pa. Get “Post Pop Depression on iTunes, Amazon and Spotify.

Underworld is the first electronic band that I ever listened to and liked thanks to the “Born Slippy” from the movie “Trainspotting” and a 2003 performance at the Field Day Festival at Giants Stadium. “Barbara Barbara, we face a shining future” is the ninth studio album released by Underworld, the British electronic duo consisting of Karl Hyde and Rick Smith. The two are joined by drum and bass producer High Contrast to create a sound that is progressive while sticking close to the band’s roots. It’s hard to image this band has been creating house music since the early 80s and although it has gone through many formations, Underworld does have a distinct sound. More than any other album, “Barbara Barbara, we face a shining future” doesn’t have a clear purpose, flowing from various influences and jumping off into the beautiful unknown. See Underworld 7 p.m. Wednesday, April 20 at Terminal 5 in New York City. Get “Barbara Barbara, we face a shining future” on iTunes, Amazon and Spotify.
Connect with #TheHighNote on Facebook, Twitter, Google+, Instagram and Pinterest.