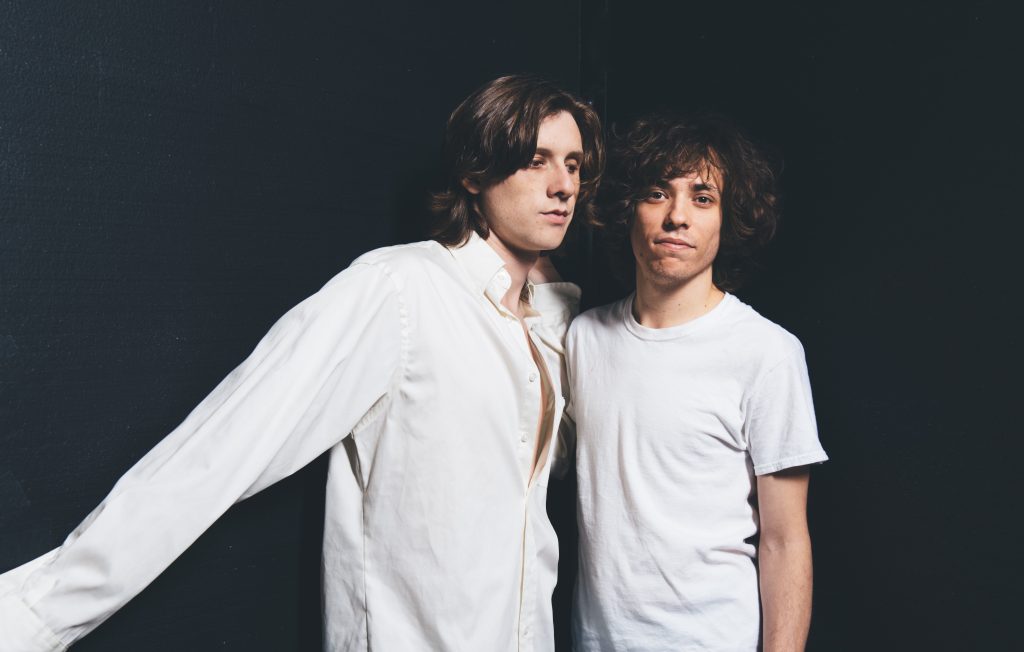 I’ve been listening to a lot of Frank Zappa lately. In the age of digital music streaming, I have an opportunity to explore artists that which I never had the chance to fully investigate their catalog. Now, I get to wake up in the morning and say to myself, “You’ve never listened to Frank Zappa’s entire discography in chronological order, until today.” But, that’s for another blog, or perhaps a series of blogs.

So, when I was looking for albums to review this week, I stopped my search shortly after hearing the opening bars of “Hang” by the California-based band Foxygen. Funky and deep with retro elements of rock ’n’ roll, jazz, rhythm and blues and classical, the album immediately captured my attention.

The result is a futuristic broadway soundtrack penned by the duo of Sam France and Jonathan Rado, who are the primary elements of Foxygen. They endeavored to use some retro methods for their fourth full-length album “Hang,” released Friday, Jan. 20 on Jagjaguwar. Each of the album’s eight tracks is propelled by a more than 40-piece symphony orchestra with supporting lyrics ranging from the satirical to the whimsical.

Written and produced by France and Rado as a follow-up to the band’s 2015 double-album “…And Star Power,” “Hang” perfectly encapsulates this moment in time for Foxygen. The band is calling it Foxygen’s “first proper studio album,” recorded at Electro Vox Studios in Los Angeles, California.

The orchestral parts on the album were arranged and conducted by Trey Pollard from Spacebomb with Matthew E. White contributing to additional arrangements. More help comes from multi-instrumentalists Brian and Michael D’Addario of the Lemon Twigs and Steven Drozd of the Flaming Lips

Like Zappa, Foxygen has an apt for turning phrases. The lyrics “Sing a song for me” start out as heartfelt and honest in the track, “Upon a Hill.” Then, by the time it ends, it is a parody of the beginning and winds up into a “Looney Tunes” jazz outro.

While the album sounds like it is heavily influenced by 70s Hollywood, the tones on “Hang” vary between tracks and even during the course of a song. France, the lead singer of the duo, channels an over-the-top persona that at times emulates, or parodies, Elvis, Mick Jagger, Freddie Mercury, Elton John, David Bowie and Zappa.

From the opening lines of “Follow the Leader,” the album takes on a soulful, funky and almost retro tone. In fact, Foxygen did not use any computers to record or mix the album. The band recorded the album on 2-inch tape using a reel-to-reel tape recorded and cut the vinyl lacquers directly from those master tapes.

The second track, “Avalon,” takes its influences from “Grease,” and “Little Shop of Horrors,” to play up the dramatic overtones on the track. It is as though the band is creating a musical Instagram that captures a futuristic image using throwback sepia colors. Those hopeful, whimsical and simpler themes carry over onto the next track, “Mrs. Adams.”

Clocking in at a little more than 30 minutes, “Hang,” demands the listener’s attention as it blends elements of jazz and classical music into rock, pop and twisted show tunes. There are few tracks on the album that try to incorporate as many styles as “America,” which lays out an emotional path across a little more than five minutes.

There are so many nods to genres and musical styles that the album doesn’t follow a linear or thematic storyline more than it’s an homage to 70s California style. “On Lankershim,” is a great example of that throwback sound, especially when heard as the follow-up to “America.” But, the track easily stands on its own as a single with its bright horns, expressive guitars and moments that pay homage to Bruce Springsteen anthems.

The second-to-last track “Trauma,” delivers a fulfilling sound and helps to push the album toward a resolution. The track, although like most on the album, plants its tongue firmly in cheek while still managing to pull on the heartstrings of the listener.

If there are comparisons to The Beatles on this album, none could be closer than the closer than final track, “Rise Up.” It has a simply-structured style, whimsical harmony, and some lovely George Harrison-style guitar riffs. If Foxygen set out to create a throwback album, “Rise Up,” nails that feeling in an accessible track that even goes out on a 70s-style rock ’n’ roll instrumental finish.

Foxygen will hit the road in support of “Hang,” which should be incredible given the intricate and theatrical elements of the album. See Foxygen Wednesday, March 22 at the 9:30 Club in Washington, D.C.; Friday, March 24 at Terminal 5 in New York City; Sunday, March 26 at Union Transfer in Philadelphia, Pennsylvania and Friday, July 28 at the Panorama Music & Arts Festival at Randall’s Island Park in New York City.