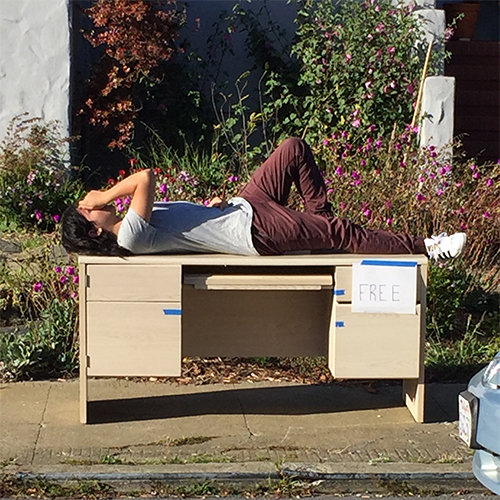 If you want to receive a sign, you have to go looking for one, right? That’s what I got exactly when I found the Longport, New Jersey water tower smiling at me when when I was flipping through new albums that were released a few weeks.

“It’s the new wave of the future!” is how Underscores describes “Fishmonger,” the debut album by the west coast electronic artist, released Friday, March 25. It is definitely that – a combination of pop, punk, emo, rhythm and blues, hip hop and rock music, influences and samples that are rearranged and mashed together for each track. And it all works, quite well.

The album comes in with some quick, punk-style drums and guitar riffs that wind up throughout the track as the refrain “And the water dried up,” is repeated in a frenzy.

Devon Karpf, of San Francisco, California is the musician and splice sound designer who creates music as Underscores as well as in the collaborative Six Impala. How the Longport water tower could be seen from the west coast is beyond me but luckily Soundcloud connected us.

The album hits its emo bedroom pop stride for “Second Hand Embarrassment.” It hits warps into hyper pop as the verse expands into a bridge that fills the uncomfortable silence: “And if you don’t say something, I’m just gonna dig myself deeper.”

As experimental as the sounds are, it is all very familiar. Underscores combines a simple acoustic guitar chord progression and the over-sampled injections of sound as well as the repeated rap-inspired refrain “It’s the new wave of the future.”

Another of my favorite tracks, “Kinko’s Field Trip 2006” has that quiet emo acoustic singer-songwriter opening before breaking down into a fuzz-induced chorus of “Hey, I think I’m full of it.” As the verse and the song continues, sounds are added and mashed and warped wonderfully.

“Spoiled Little Brat” shows how far Underscores can take the creativity of this project. It begins as a damn solid pop punk song and then builds up with some hyper pop into turbo-boosted electronic pop chorus and lives up to the tag “It’s the new wave of the future,” by the time the song ends.

I love the hiphop influences on “Your Favorite Sidekick” where Underscores is joined by 8485. But, it leans into the fun pop side of the songwriting with the super catchy hook “Fake smile, run it back, guess I’ve never tried it / OC, double dose, off the psilocybin.”

The lovely outlier is the touching acoustic track, “The Fish Song,” about the golden bangus that was donated to Bureau of Fisheries and Aquatic Resources in Dagupan City, Philippines and then died due to stress and low dissolved oxygen.

The album closes with one of the more adventurous tracks of the 10 songs, 33 minutes and 45 seconds of “Fishmonger.” The confessional “Del Mar County Fair 2008” is a meandering track that includes some notes that remind me of Animal Collective and features Maxwell Young.

The debut album by Underscores is a creative mashup that shows the potential of an emerging artist. “Fishmonger” is full of catchy hooks, nostalgic rhythms and introspective lyrics.