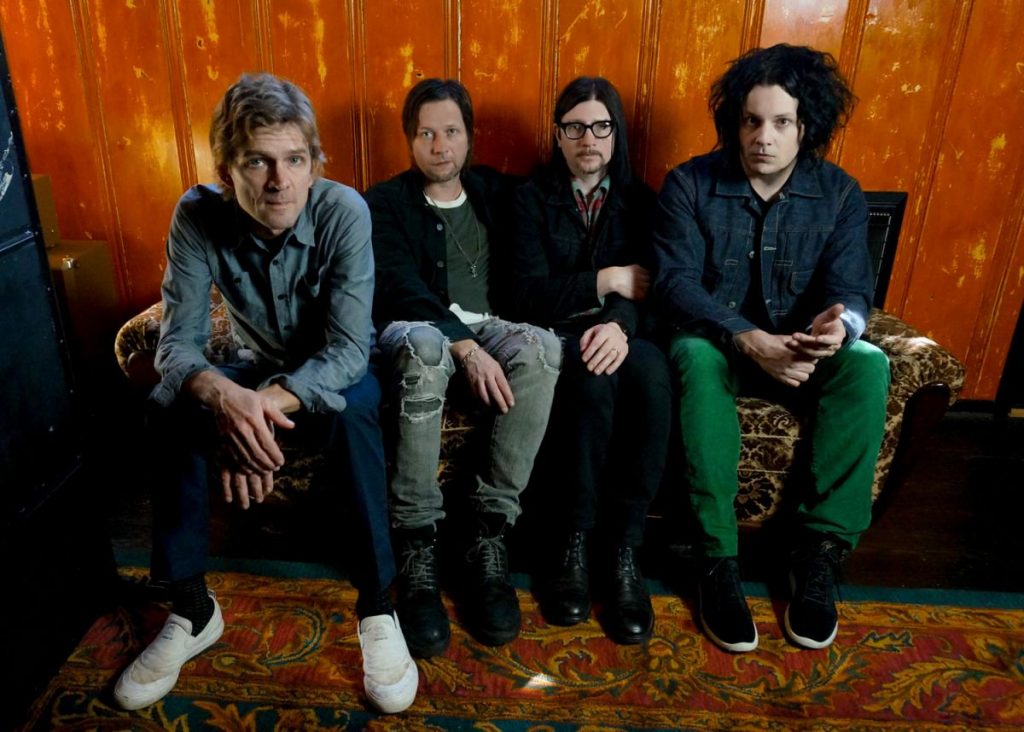 Since The Raconteurs took 11 years between album releases, so I decided to take my time with this review the rock ’n’ roll band’s third album “Help Us Stranger,” released June 21, 2019 on Third Man Records.

The band is one of the many side projects by Jack White, the songwriter, producer, multi-instrumentalist and founder of Third Man Records. With its latest release, The Raconteurs have made another album of consistently guitar-heavy riffs that carries the Detroit blues torch into a new decade.

In a world where the Internet is full of people are saying that Greta Van Fleet is just a step better than a Led Zeppelin cover band, The Raconteurs have made a rock album that pays respect to its ax-wielding forefathers.

The album opens with “Born and Razed,” the perfect track to pull you into the gritty blues world that White created with his bandmates Brendan Benson, Jack Lawrence, and Patrick Keeler. The song is an anthem set The Raconteurs flag flying with swirling guitar riffs.

The second single from the album is the fun, upbeat second track, “Help Me Stranger.” Rooted with a light acoustic-guitar strumming rhythm, the bass, lead guitars are free to exemplify the voice of each instrument.

“Help Us Stranger” continues the acoustic sounds on the moody and retro “Only Child.” It has a sweet melody and deep lyrics while the keyboards by Dean Fertita are poised for phase-shifting the song.

“Only child, sensitive soul
You see the beauty in everything
Without ever being told

I thought about leaving you once or twice
Leaving it all behind and never think twice
Somewhere far away on a beach sounds nice
Nothing on my mind, nothing on my mind”
-“Only Child,” The Raconteurs

The album stays true to its unique brand of art throughout its 12 tracks and 41:27. Songs that may seem out of place from other bands seem right at home on “Help Us Stranger.” For example, the 80s proto-punk “Don’t Bother Me,” the 70s piano-led rock ballad “Shine the Light on Me,” and the 90s garage-rock “Live a Lie.”

White plays a Fender B Bender on the southern-fueled ballad Somedays (I Don’t Feel Like Trying) that pays homage to Lynyrd Skynyrd tracks like “Freebird” and “Tuesday’s Gone,” with a little bit of The Beatles mixed in. The B Bender is a country music instrument that has a mechanism attached to the guitar strap that runs inside the body and pulls the B string on the guitar to give it a steel guitar twang.

The other members of the band really shine on the cover of Donovan’s “Hey Gyp (Dig the Slowness),” especially Keller’s drums and Benson’s harmonica work. I’ve heard so many versions of this song that I didn’t even know Donovan originally wrote it and The Raconteurs make it shine in 2019.

The first single from the album, “Sunday Driver,” has all my favorite ingredients for a Raconteurs song; heavy rhythm, “whoops” and “yeah’s,” a simple, shouted chorus and some warped psychedelic blues riffs.

Benson takes center stage for the vocals and the lyrics on “Now That You’re Gone,” which has lyrics dripping with that southern sweetness. It features some of my favorite lines on the album: “And where you’re gonna go? Not that I care. And who can you trust now that I’m not there?”

“What’s Yours is Mine” hints of influences from Frank Zappa and The Mothers Invention. The simplicity of the lyrics, especially the words “Yours is Mine,” gives the band freedom to create some intense guitar solos and warped traditional elements. The album ends almost as it begins, with a track that shoots you out of the world of “Help Us Stranger.” It’s as if all the characters from the movie are lining the road out of town waving goodbye as you pass by. “Thoughts and Prayers” isn’t the snarky phrase that permeates popular culture; it’s a rumination. The journey back in time is aided by the fiddle playing from Lillie Mae Rische.

The Raconteurs may have taken more than a decade to release a studio album, but it couldn’t have come at a better time. When I hear my friends tell me they can’t find any new rock music, the powerful Jack White and company delivers with a soulful, funky and uncompromising album of rock songs.