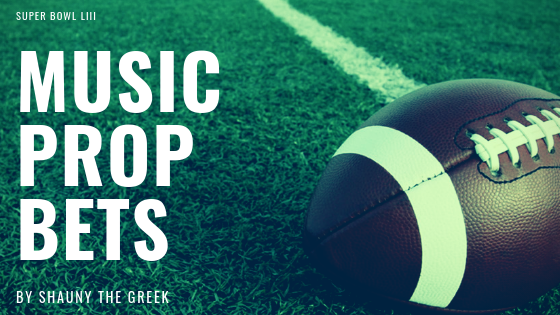 By Shauny the Greek

Once again, the New England Patriots are in the Super Bowl, again, this time facing the Rams in a repeat of Super Bowl XXXVI. This time, the Rams are in Los Angeles for the first times since the franchise moved to St. Louis after the National Football League 1994 season.

The Rams won the 1945 NFL Championship Game when the team called Cleveland home and Super Bowl XXXIV when the team was in St. Louis, but has never brought a championship to the City of Angels.

Like a lot of you out there, The High Note is looking forward to the hitmakers on stage as the playmakers on the field. This is a music website, after all, and we’re here to lay out Shauny the Greek’s picks for Super Bowl prop bets. Odds provided by Oddshark

According to CBS Sports, the anthem has been sung in over one minute and 45 seconds in each of the last six Super Bowls and only two artists have sung the anthem in less than 1:45 since 2006. But Gladys Knight is on her home turf of Atlanta, Georgia so I think she will soak up the spotlight – I’m going with the bookmakers and picking the over.

Sure, the Super Bowl is a formal affair, but it’s not that formal. Also, Gladys Knight is a classy lady. Recent photos of her performing show her in a dress, so I’m putting my money on the yes bet.

Will Gladys Knight forget or omit a word from the National Anthem?
Yes +300
No -500

On the big stage, with the jets and fireworks flying overhead, do you think Gladys Knight will freeze under the pressure? I don’t. I’m also fairly certain that she already knows the words and will practice. I’m betting no.

Will any scoring drive take less time than it takes Gladys Knight to sing the National Anthem?
Yes -110
No -130

This is a close one but I’m definitely going with Yes on this one. Tom Brady is going to bring his rocket arm to the game and I wouldn’t doubt the Rams quick-passing to break up the Patriots defense.

There is a lot of chatter about guest appearances during the Halftime Show. My sources are telling me that a big name is expected to hit the stage in addition Maroon 5, Travis Scott and Big Boi. I’m taking the over because I think there will be eight songs total.

What will be the first song performed by Maroon 5?

“Girls Like You,” featuring Cardi B. is Maroon 5’s most recent chart-topping hit. “Moves Like Jagger” sounds so good but my sources tell me that “Payphone” is the smart money.

What Will be the predominant color of Adam Levine’s top at the start of the Halftime Show?
Black -200
Any Other Color +150

Adam Levine is a flashy guy. I like the “predominant” color because you know there is going to be glitter in there. The bookmakers like black but I’m going with any other color on this one. My sources are telling me he’s thinking about green or teal.

The weather forecast is calling for 60 degrees and scattered rain showers on Sunday, Feb. 3, 2019, so I don’t think he’s going to be wearing a beanie. I also don’t think he will rock a fedora or any kind of hat. I’m going with the bookmakers on this one and betting no.

Will Big Boi and Adam Levine perform “Mic Jack” during the Halftime Show?
Yes -400
No +250

From Big Boi’s 2017 album “ Boomiverse,” Levine is a feature on the track “Mic Jack.” With lyrics like:

you would think that the track would be a perfect fit. It very well may the perfect intro for Big Boi on the stage. But I’m going against the bookmakers and betting no on this one.

Will Christina Aguilera Make an Appearance During the Halftime Show?
Yes +250
No -400

Why this is the bet instead of Andre 3000 making an Outkast reunion appearance is beyond me. But, considering Big Boi was the special guest on Aguilera’s Liberation Tour, which recently wrapped up, makes it more interesting. However, without a major connection to Atlanta, I’m going with the bookmakers and bet no.

Will Maroon 5 play “Sweet Victory” as a Spongebob Squarepants tribute.
Yes -230
No +160

Fans have petitioned and the band has hinted at paying tribute to everyone’s favorite character who lives in a pineapple under the sea. It definitely seems like it would be a smart move for Maroon 5 to play the same song played during the halftime show of The Bubble Bowl in an episode of “SpongeBob SquarePants,” so I’m going with the oddsmakers on this one.

If you’re going to bet on the big game and you’re in a state that you can legally bet on sports in the United States, consider DraftKings. This isn’t an ad, but here’s a link that would get me a bonus bet if you do sign up. As always, bet with your head, not over it and call 1-800-GAMBLER if you have a gambling problem.

Be safe and have fun!