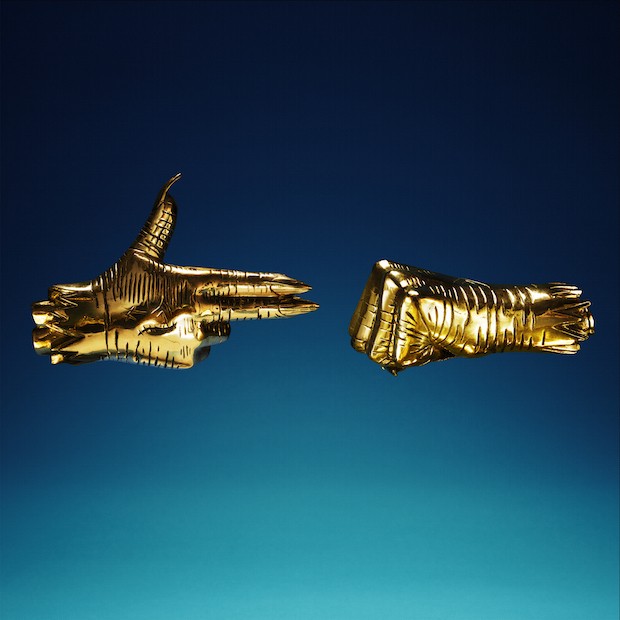 Santa had some fresh tunes to bump in his sleigh on Christmas because the coolest duo in hip-hop surprised fans with a free download of the latest Run the Jewels album “RTJ3.” The digital version has arrived in the late night hours of Dec. 24 and is available now to stream and download via Run the Jewels, Apple Music, Spotify and Tidal. The physical album is expected Friday, Jan. 13.

The Christmas Eve release is the third album by the duo comprised of rapper and producer El-P and rapper Killer Mike. Since they met and formed the group in 2013, they have permeated pop culture with a “Portlandia” sketch, appeared on comic books and even remixed their second album to samples of cat sounds and donated the $65,000 in proceeds from “Meow the Jewels” to charity.

If not for its music, the most recognizable aspect of Run the Jewels is the gun and fist hands symbol, which has been transformed for each album release. “For us, the ‘RTJ1’ hands were about ‘taking what’s yours’ – your world, your life, your attitude. The ‘RTJ2’ hands were wrapped in bandages, signifying injury and healing, which for us represented the growth in ideas and tone of that album,” they said in an interview with “Spin.”

“For ‘RTJ3’ the bandages are off, the chain is gone and the hands have been transformed into gold. For us this represents the idea that there is nothing to take that exists outside of yourself. You are the jewel”

El-P and Killer Mike create a dangerous chemistry together. They meld floor-shaking bass with smart, stinging delivery. With each subsequent album release, listeners can hear Run the Jewels maturing. El-P’s beats now anticipate the urgency of Killer Mike’s style and their verses together are more balanced than the previous two albums.

On “RTJ3” the bravado is less flash and more bang. The flippant style that carried the duo’s energy in the past is now more subtle and powerful, but is still fun and is serious where it needs to be. Killer Mike is actively political now and speaks with an intelligent authority that demands attention.

On the opening track “Down,” Killer Mike delivers a creative rhyme about the Bill of Rights and urges his audience to vote. Then, he comes back on the next track, the first single from the album, “Talk to Me,” with: “ Went to war with the Devil and Shaytan, He wore a bad toupee and a spray tan.”

Killer Mike pulls out all the guns on “RTJ3” like a slow-motion modern musical rendition of the final shootout scene in “Scarface.” In between calls to action, Killer Mike flaunts his carefree style through gonzo accounts of a rap lifestyle that tips its hat to late 80s and early 90s hip-hop. Killer Mike doesn’t try to explain the world he sees, he magnifies and retells its absurdity.

“Rap terrorist, terrorize, tear it up
Brought gas and the matches to flare it up
Militant Michael might go psycho
On any ally or rival
Born Black, that’s dead on arrival
My job is to fight for survival
In spite of these #AllLivesMatter-ass white folk”
– Killer Mike, “Talk to Me.”

On “Hey Kids (Bumaye),” Killer Mike begins by calling out fascists. Then El-P follows up with: “I lived half my life to give half my cash to these half-man imps, They got half a heart, they give half a fuck, they got half the guns.” On “Don’t Get Captured,” the duo tackle racial inequality from gentrification to police brutality. By the time we get to “Thieves! (Screamed the Ghost),” Killer Miler dismisses CNN anchor Don Lemon and ends with a sample of Dr. Martin Luther King, Jr.

The second single from “RTJ3” is “2100,” a track that directly addresses the fear that has spread through America during the 2016 primary and general elections. It opens with the lines: “How long before the hate that we hold, Lead us to another Holocaust?”

Is “RTJ3” a protest album? There are moments that sounds like a call for more awareness about inequality in America. Other moments create a soundtrack for the end of the world that actually describes the flames. As the attitudes shift through the songs, El-P’s magnetic approach to production holds all 51 minutes together.

The Brooklyn-based producer pulls from a palette of jazz, funk, rock and blues to weave one entire electronic canvas that flows seamlessly. Taken separately, the tracks on “RTJ3” stand alone but there is a holistic experience by listening to how the songs interlock. The album begins with an immediate sprint off the line until “Stay Gold,” then shifts into a comfortable gear.

For the final two-part track, “A Report to the Shareholders/Kill Your Masters,” the album take a meta turn and our narrators reflect on their art. El-P talks about how he didn’t think the band would be anything when he first started it: “And I’m scared that I talk too much about what I think’s going on, I got a way with this, they might drag me away for this, Put me in a cage for this, I might pay for this.”

When the beat switches, Killer Mike comes in with some inspirational energy: “But that’s a feeling, baby, ever lose, I refuse, I disabuse these foolish fools of they foolish views, I heard the revolution coming, you should spread the news, Garvey-mind, Tyson-punch, this is bad news.”

With “RTJ3,” Run the Jewels takes a long hard look at the current state of American culture with an eye toward the future. The rhymes and production have evolved since “RTJ2” to create a new favorite for fans and new fans out of first listeners. “RTJ3” shows that Run the Jewels can be an active voice in pop culture and be a catalyst for artistic expression.

See Run the Jewels Wednesday, Jan. 11 at the Electric Factory in Philadelphia, Pa. and Thursday, Jan. 12 at Echostage in Washington, D.C.