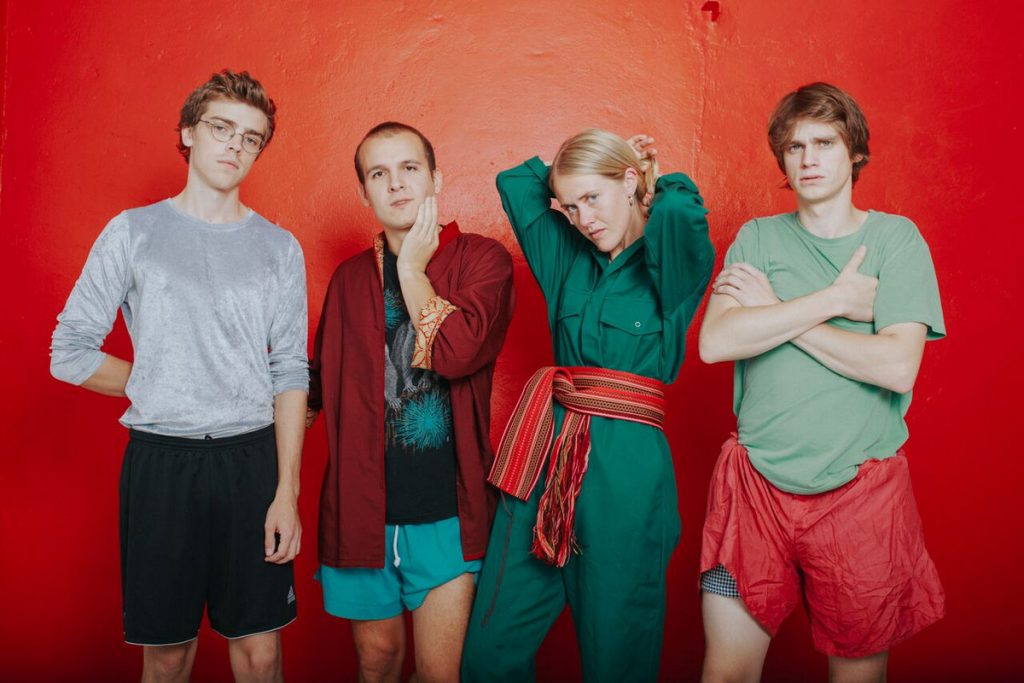 The universe works in mysterious ways. I have been sitting with the Pom Poko album, “Cheater,” for the past few weeks. Every couple of days I will go back and listen to it, like it more than the previous time I heard it, and then would go back to getting lost in the day.

So what are the odds that after writing The High Note for the past eight years, I would finally discover a band from Norway? And then another the following week.

I’ve always liked Norway. When I attended the Global Young Leaders Conference in high school, I befriended a girl named Ingvald who was from Norway. She taught me how to say one of the only phrases I have ever learned in German “du hast schöne Augen.” I do not have pretty eyes, but Ingvald did. The pop-punk sweetness of Pom Poko‘s sophomore album “Cheater” has me nostalgic for those simpler times from the late 90s.

Released Friday, Feb. 15 on Bella Union records, “Cheater,” captures the euphoric rise of this up-and-coming band just as it has lifted off the ground in Oslo.

The album opens with the ferocious title track which combines sharp, noisy guitar riffs with crisp drums and the innocent voice of Ragnhild Fangel. The intensity of the track wains for a dreamy bridge that connects the punk rock with pure artistic expression.

Fangel uses that innocence to create the sing-songy verse of “Like A Lady,” one of the strongest tracks that I’ve heard in awhile. I while sometimes the upper register of her voice is nearly unintelligible for my old ears, I love when she sings, “Now you do as your told, Slowly you’re growing old, Like a lady, like a lady, like a lady, yeah.”

However, the best part of the track, like the previous one, was neatly tucked inside a neat-little fuzzy art-rock bridge that holds on until the end of the song.

While the frenzy of rock ‘n’ roll guitars is the fuel behind the band’s songs, it doesn’t devour Fangel’s shining voice. While the music gets quiet for the chorus on “My Candidacy,” the band really lets it rip with her in the driver’s seat for the final take.

While I was busy getting lost in the bedroom pop that begins “Danger Baby,” the band kicked in to guide me toward the chorus with a hypnotic riff. It sounds like if anti-folk went folk, as if letting Justin Vernon produce a tUnE-yArDs album.

“Clap your hands and everybody get down,” will be stuck in your head for hours after listening to “Andy Go To School,” if not semesters. While it’s got that pop exterior the space between verses is jammed with disorienting 60s psychedelic sounds.

The song basically ends on the same note that begins the next, “Look.” As if to say, “Andy Go To School. Look.” In addition, “Andrew” is the name of the second track, which was as close as I could find to making a complete love connection within the themes of “Cheater.”

There are a lot of contrasts on the album, both sonically and lyrically. I don’t know if Pom Poko is playing some musical sleight of hand with the production – but if you take the lyrics of “Look,” they could easily be applied to a RHYE soundbed and played after yoga. However, the way it’s sung and played, look is almost a command.

The album ends with the melodic “Body Level,” which has explores not only the limits of the band’s rock ‘n’ roll riffs but also the soft sweetness of Fangel’s register.

“Cheater” by Pom Poko has all the fun edge of pop-punk with the artistic interpretation taken from the land of fjords and snow-capped mountains. Norway may be known for those things but Death by Unga Bunga and Pom Poko are proving that music a magical export.