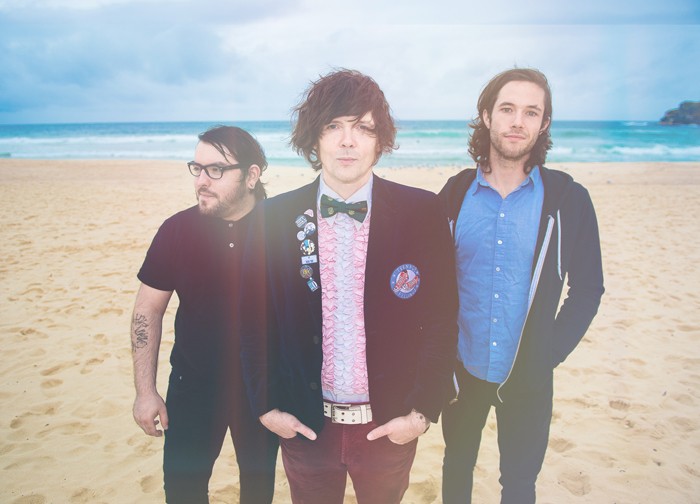 As music evolves and artists take their expression to its creative limits, we as listeners get to enjoy the ride. Sometimes it’s a longtime friend, such as Bruce Springsteen, or sometimes it’s a band like Beach Slang that embodies his spirit and creates songs that resonate for a new generation of music lovers. Either way we win and The High Note celebrates it each Friday.

“There is heaven in these streets,” Beach Slang‘s lead singer James Alex sings on “Future Mixtape For The Art Kids,” the opening track on the second album by Philadelphia-based punk rock band’s sophomore release,
“A Loud Bash Of Teenage Feelings,” released Friday, Sept. 23.
This album is exactly what you would expect as a follow-up to last year’s tremendous debut “The Things We Do to Find People Who Feel Like Us.” With a mixture of The Bouncing Souls and The Gaslight Anthem, Beach Slang pairs beautiful and hopeful lyrics with gritty, distorted and gritty rock rhythms.
The second track on the album, “Atom Bomb,” builds with an angsty hook and explodes with veracious delivery. The first single, “Punks In A Disco Bar,” Alex channels his inner Bruce Springsteen and lets his words echo in the hearts of listeners. My personal favorite is “Spin The Dial,” but there are so many standout moments amongst these 10 tracks.
See Beach Slang Tuesday, Sept. 27 at Rough Trade NYC in Brooklyn, New York; Saturday, Oct. 8 as part of the Project Pabst Citywide Festival at the Electric Factory in Philadelphia, Pennsylvania; Tuesday, Oct. 11 at Black Cat in Washington, D.C. Get “A Loud Bash Of Teenage Feelings,” from Beach Slang, Polyvinyl Records, iTunes, Amazon, Google Play, Spotify and Tidal.

Happy Birthday Bruce Springsteen! Springsteen celebrated his 67th birthday Friday, Sept. 23 with the release of “Chapter and Verse,” the companion album to his anticipated autobiography “Born To Run,” expected to be released Tuesday, Sept. 27.
The 18 tracks selected by Springsteen span the songwriter’s career through 2012 including some previously unreleased tracks. Set in chronological order, the album begins in 1966 with “Baby I,” recorded in 1966 by The Castiles, co-written by Springsteen and sung by George Theiss. Other previously unreleased tracks including “You Can’t Judge A Book by the Cover,” by The Castiles, “He’s Guilty (The Judge Song” by Steel Mill, “Ballad of Jesse James,” recorded in 1972 by The Bruce Springsteen Band and his studio demo “Henry Boy.”
Springsteen fans will love this sound of early Springsteen swagger on “He’s Guilty (The Judge Song).” From there it includes some highlights from albums “The Wild, The Innocent and the E Street Shuffle” through “Wrecking Ball.”
Get “Chapter And Verse” from Bruce Springsteen, iTunes, Amazon, Google Play, Spotify and Tidal.

Hamilton Leithauser + Rostam – “I Had a Dream That You Were Mine”

The Walkmen lead singer Hamilton Leithauser and former Vampire Weekend member and producer Rostam Batmanglij teamed up for the inspiring “I Had a Dream That You Were Mine,” released Friday, Sept. 23.
The New Yorkers that both represent their own corners of indie rock in the city, takes a more folksy roots approach to the songwriting on “I Had a Dream That You Are Mine.” From doo-wop to Paul Simon-like acoustic ballad, there are no bounds to this collaboration.
The inspiring trip through rock ’n’ roll history takes a cue from the two men who are leading the expedition and uncovers newfound greatness along the way. From the first track, “A 1000 Times,” the album chooses a path less traveled. My Favorite track on the album was “In a Black Out.”
See Hamilton Leithauser + Rostam Monday, Sept. 26 at Rough Trade NYC in Brooklyn, New York. Get “I Had a Dream That You Were Mine” from iTunes, Amazon, Google Play, Spotify and Tidal.

Wye Oak founder Jenn Wasner spreads her wings on her first full-length solo record as Flock of Dimes, “If You Hear Me, Say Yes,” released Friday, Sept. 23.
With moody, dreamy synth-pop rhythms, “If You See Me Say Yes,” is an ambitious adventure into the moody, artsy and avant-garde.
In spite of danceable tracks, Warner creates a mysterious and compelling nature to her songs. These songs all at once sound inviting and lonely as sung by Warner. The first single “Semaphore,” is exceptional and has a fun upbeat groove with a subtle hint of distance and longing.
See Flock of Dimes Tuesday, Nov. 1 at Johnny Brenda’s in Philadelphia, Pennsylvania; Wednesday, Nov. 2 at Rough Trade NYC in Brooklyn, New York and Friday, Nov. 4 at U Street Music Hall in Washington, D.C. Get “if You See Me Say Yes,” from Flock of Dimes, iTunes, Amazon, Google Play, Spotify and Tidal.

Canadian singer-songwriter Shawn Mendes is back with his sophomore release of soulful pop-inspired songs on “Illuminate,” released Friday, Sept. 23. Check it out from Shawn Mendes, iTunes, Amazon, Google Play, Spotify and Tidal.