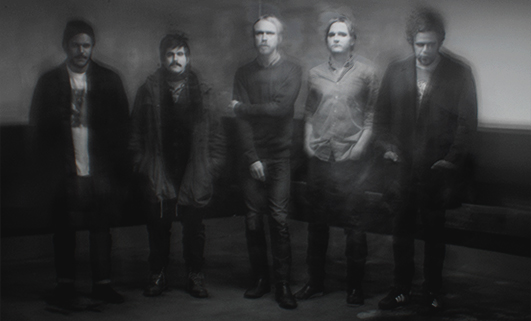 This week, The High Note Blog crossed genres and continents in search of the best new albums released Friday, July 22, 2016. Whether you like jazz, electronic, heavy metal, rock, rap or hard rock; here you’ll find something fresh to add to your playlist.

American jazz guitarist was Charlie Hunter heavily influenced by the blues on his 18th studio album “Everybody Has a Plan Until They Get Punched in the Mouth” released Friday, July 22.
Hunter, who as a bandleader and solo artist, has transcended genres through his virtuosity on the guitar, incorporates blues, rock, and latin music in addition to his signature jazz style on his latest album. Recorded live in Hudson, New York, Hunter is joined by drummer Bob Previte, cornetist Kirk Knuffke and trombonist Curtis Fowler for 10 new tracks, including the title track which refers to a Mike Tyson quote.
Hunter takes a loose, soulful approach to the custom-made seven-string guitar that especially lends itself well to blues tracks like “No Money, No Honey.”
See Charlie Hunter Saturday, Sept. 17 at the Long Beach Jazz Festival in Long Beach, New York. Get “Everybody Has a Plan Until They Get Punched in the Mouth” from Charlie Hunter, iTunes, Amazon, Google Play, Spotify and Tidal.

Experimental electronic artist Elysia Crampton adapted an epic poem to music for her sophomore album “Elysia Crampton Presents: Demon City,” released Friday, July 22.
Crampton uses not only music and audio samples but also their frequencies to express feeling about society and spirituality.
The Bolivian-born artist called this album an official document on the Severo style, which is “An ongoing process of becoming-with, made possible by the family-networks and communities that have inspired and sustained our survival and collective search for transformative justice.”
Crampton collaborates with Chino Amobi, Why Be, Rabit, and Lexxi to create seven tracks that are each accompanied with a quote to add context.
See Elysia Crampton with DJ Premier, Ash Koosha and Break World at the MoMA WarmUp 3-9 p.m. Saturday, Aug. 27 at the Museum of Modern Art PS1 courtyard. Get “Elysia Crampton Presents: Demon City” from Break World Records, iTunes, Amazon, Google Play, Spotify and Tidal.

Harakiri For The Sky – “III: Trauma”

Black metal fury band Harakiri for the Sky is gritty on its third album, “III: Trauma,” released Friday, July 22.
The Austrian duo paint a dramatic post-rock picture from the album’s epic 11-minute opening, “Calling the Rain.”
The seven tracks that follow are equally impressive and manage to sound like a blend of the first albums by Thursday and Thrice created as a soundtrack to “The Hobbit.”
The two members, M.S. and J.J., weave an incredible tale that harnesses the power of anger and sadness. There’s desperation, honesty and a raw nature to these songs;“III: Trauma,” is not just a teenage-angsty thrash metal album but a deeply complex symphony of volatility. Songs like “The Traces We Leave,” manage to pull a listener’s emotions into a whirlpool of emotions in a feverous swirl of guitar and drums.
Get “III: Trauma” from Bandcamp, iTunes, Amazon, Google Play, Spotify and Tidal.

Have you heard of The Amazing Swedish band? “Ambulance,” the fourth album by The Amazing, released Friday, July 22, is eight tracks of sprawling, well-orchestrated psychedelic and experimental rock.
The Amazing uses three lead guitarists to mash up melodies and overlap sonic layers that wash over songs with refreshing ease.
The somber sound of the album starts immediately with the title track, “Ambulance,” and introduces listeners to the swirling guitars, punctuated drumming and dramatic piano. Instead of jumbling together, these tracks have an powerful free energy that flows throughout the entire album while each song leaves a distinct impression. By the third track, “Blair Drager,” things get a little more funky and on the closing number, “Perfect Day For Shrimp,” delicate acoustic guitars and vocals create a whimsical sound.
Get “Ambulance” from Partisan Records, iTunes, Amazon, Google Play, Spotify and Tidal.

After three years in federal prison and five years since his last major release, Gucci Mane is back as a new man on “Everybody Looking,” released Friday, July 22.
The Atlanta, Georgia-based rapper is sober, lean and recorded this album in less than a week during the nearly two months since being released from jail.
On the opening track, “No Sleep (Intro),” Gucci is showing off his new slim look and talking about his sobriety and love for life in his signature, almost throwback style.
It could be Gucci’s flow or something about the vibe of this album but it has the feel of a classic hip hop record. Gucci is loving it more than ever, teaming up with Young Thug on “Guwop Home,” and recording the tense songs that he wrote while he was in the joint, like “1st Day Out Tha Feds,” which he released the day after he was released from the joint.
Get “Everybody Looking” from iTunes, Amazon, Google Play, Spotify and Tidal.

A good hard rocking album can make just about anyone feel young. Pulling together the best of a variety of bands, Dunsmuir releases its self-titled debut album Friday, July 22 with a style that pays homage to late 70s early 80s heavy metal.
Comprised of Clutch lead singer Neil Fallon, The Company Band guitarist Dave Bone, Fu Manchu bassist Brad Davis and Black Sabbath and Dio drummer Vinny Appice; the term supergroup has been thrown at Dunsmuir but it sounds like these guys are just having fun playing the music they love.
On songs like “Our Only Master” and “Crawling Chaos” there are a lot of moments for listeners that go something like this: “Oh that sounds like Iron Maiden;” “Oh that’s a little Motorhead;” “Do I hear a bit of Black Sabbath?” It all sounds delightful.
Get “Dunsmuir” from Bandcamp and iTunes.