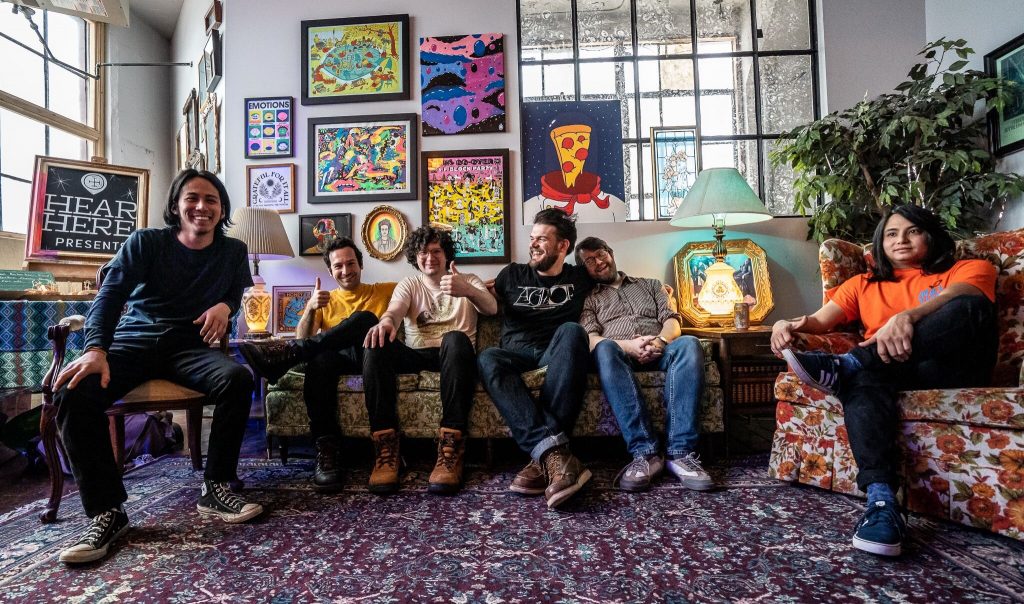 It’s difficult to capture the magic that a jam band creates on stage in the recording studio. I have heard some of my favorite live bands struggle to translate the energy created between the band in full flow with the audience into a radio-ready package.

I think we can all relate thanks to it going on nearly two years of digital meetings being the standard and “You’re on mute” becoming the defining statement of this era now that connection through computers comes first.

Garcia Peoples adds a dose of New Jersey grit to its classic rock riffs and progressive sounds on the band’s latest album, “Dodging Dues” released Jan. 12, 2022 via No Quarter Records. The rustic sounds emerging from its roots in Rutherford, Bergen County lean into the blues and fuzzy rock vibes across seven tight tracks spanning 34 minutes, 11 seconds; which is pretty atypical for a jam band.

The album was written as a group effort from the band members with guitarists Tom Malach, Danny Arakaki, and Derek Spaldo sharing the majority of the singing and songwriting but share those duties with keyboardist Pat Grubler, bassist Andy Cush and drummer Caesar Arakaki.

They made it in 2020 in two sessions, one pre-pandemic in February and one during, in October, with producer Matt Sweeney at Strange Weather in Brooklyn.

Beginning with the twang of a southern rock guitar riff and then jumping into a controlled fuzzy frenzy on “False Company,” the band completely gels from start to finish.

The riff grows and becomes stronger as layers the guitarists play off one another – slipping in and out of harmony as do the band members’ voices. With a couple of extended instrumental breaks in the middle and to close the song, the four minutes sound much longer even on repeat listens.

Garcia Peoples channels some cool Dire Straits vibes on “Cold Dice,” with some psychedelic underwater-sounding vocals that add some reality to the fantastical chord progressions and rhythms. It rolls right into the following track, which anchors the album.

My favorite song, “Tough Freaks,” has a sing-a-long feel with all the members joining in for the refrain calling all the tough freaks to flood the streets. The track holds the hippie ethos in high regard talking about life on the road and the joys of gardening.

The loose jam picks up on the following track “Stray Cats,” with a vivid and realistic image “Six a.m. total darkness, Sixth Ave. is a shitshow, six women walk by, while I peered out the window.”

On “Here We Are” the band ramps up its verses and then opens its jam from the top of the chorus, similar to 90s rockers The Samples, and by the end of the track the band aligns for a spacey sonic journey. It’s the longest track at 8 minutes, 35 seconds while the remainder of the tracks rest comfortably around the 4-minute mark.

The band goes deep into prog-rock territory on “Cassandra” and then pops out like a meerkat to jump into “Fill Your Cup.” The latter is a punky, funky and rollicking track.

It could just be that my annual membership dues are ready for renewal or the strong Jersey connection, but I love the retro-rock sounds of Garcia Peoples on “Dodging Dues.” The band works together to create a healthy balance of progressive and explorative jams while staying true to its roots-rock sound.