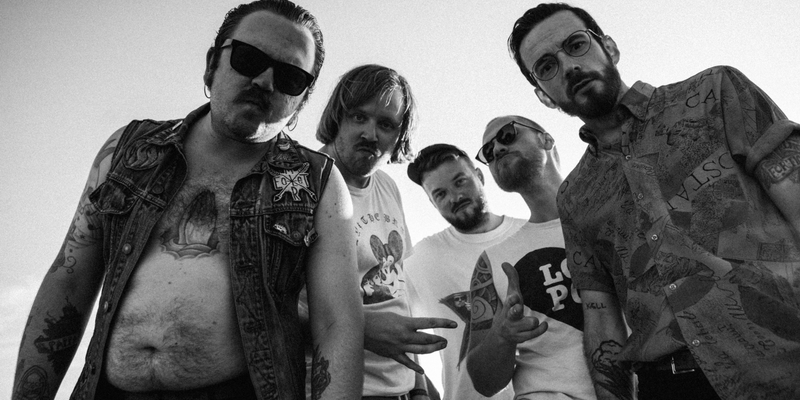 One of my favorite quotes is of course something that I can’t find on the internet. I am almost positive I heard Utah Philips say it, so it could have been anyone. But here goes: “Had fun once – liked it.”

There is a point to this blog – and this is fun. I mean, at least originally it was my job. A cool $50 per week would be added to my paycheck if I agreed to write a blog that was requested by my publisher. My editor told me that meant I had to come up with something to write about every week and The High Note was born because if I was going to be forced to do something I was going to have fun while doing it. And, if had to write about something it better be the thing I love and know the most about – music. So, when I did my New Music Friday blog a couple of weeks ago I smiled when I read the name Death By Unga Bunga – because it reminded me of the Futurama episode about death by snu snu. Then, I gave the band’s latest album “Heavy Male Insecurity” a listen and could actually hear them having fun through my headphones.

Winning me over with wailing guitars, “Heavy Male Insecurity,” released Feb. 12 on Jansen Records, rocks in the most glorious of ways. It’s the sixth album by a band that hails from Moss, Norway and lists immaculate pizza-eating as one of its accomplishments in its bio.

“There’s a place for every misfit in this stupid world even though it might not always seem that way,” the band said in a release. “You’re more than welcome to hang with us.”

The High Note is all about inclusivity, after all, which is exactly how the album begins. “Modern Man” goes through all the attributes that are desirable tropes of what a guy should be like in 2021: he’s caring, endearing, a great listener, a feminist who doesn’t eat meat and splits the bill on dates.

Beginning with cracking open what sounds to be an ice cold Keystone Light, “Egocentric,” puts forth some thunderous drums and killer rock riffs for a solid three minutes collimating with an 80s-style harmonized guitar solo.

Bromance gets put in the spotlight on “My Buddy and Me,” which is one of the happiest songs about a questionable friendship that I have heard in awhile, even if it’s absolutely hilarious with the lyrics “If you were Queen Bey, I would be your Jay-Z.”

I love all the punk-sounding riffs on tracks like “Not Like The Others” and “All Pain No Gain,” all of which have the attitude of my favorite track on the album, “Live Until I Die.”

In what I would call some serious party-rock vibes, “Live Until I Die,” really can’t be listened to without some headbanging. It gives me the same kind of feeling I get when I listen to Andrew W.K. The song itself is a parody of an 80s teen skateboard movie and brings me back to all those happy high school music memories.

Even when the band is poking fun at something, which is rare, Death By Unga Bunga’s rock ‘n’ roll chops are undeniable. “Trouble,” is a great track that stands alone from the whole “Heavy Male Insecurity” theme but still fits in as being about the guy your mother warned you about.

The band even ventures into some of that pop, garage rock sound on “Faster Than Light,” and “White Lies.” The latter makes me think the band is overcompensating for its ability to create likable rock songs with its immaturity – cue Frank Zappa.

Music, I think, for the most part, should be enjoyable. The No. 1 policy at The High Note is that I write about what I like and “Heavy Male Insecurity,” was a fun listen from start to finish. It’s 10 tracks of pure enjoyment like a Kevin Smith movie or a Chipwich.

Stop taking yourself so seriously and enjoy some “Heavy Male Insecurity.”