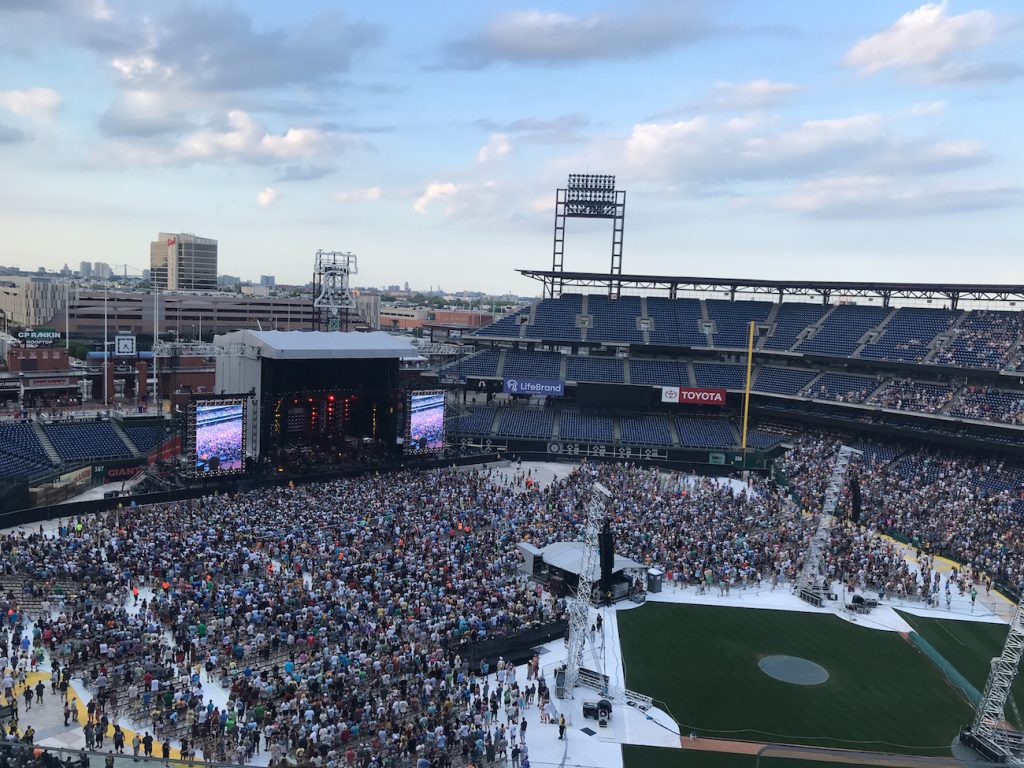 The circus came to town Sunday with Dead and Company carrying on the tradition of the Grateful Dead during a stop at Citizens Bank Park in Philadelphia.

With the Grateful Dead playing some 50 concerts in Philadelphia throughout its stretch of touring between the late 60s and early 90s, the band has a dedicated fanbase that spans generations.

For those who haven’t followed the legacy of the Dead after its fatherlike leader Jerry Garcia died in 1995, its members continued their solo projects including Bob Weir and RatDog as well as Phil Lesh and Friends. The band members collaborated with one another under the names The Other Ones and The Dead, but Lesh has remained largely separate from the rest of the band with the exception of its 50th anniversary with a set of concerts at Soldier Field in Chicago in 2015 with Mayer taking the role of lead guitarist and singer.

Following the anniversary concerts, the rest of the band decided to continue touring without bassist Phil Lesh and formed Dead and Company with Weir and Mayer, who was joined by original drummers Mickey Hart and Bill Kreutzmann as well as bassist Oteil Burbridge and Jeff Chimenti on keyboards. They have toured every year since.

The 2022 summer tour kicked off June 10 with a show at Dodger Stadium in Los Angeles and so far has made waves as they traveled the country as possibly the best tour to date.

The band however has encountered a few setbacks along the way including Kreutzmann having to leave a show in Cincinnati, Ohio after testing positive for Covid-19 last month to be replaced by Jay Lane. This was after Kruetzmann was seen using an oxygen tank at a show in oulder, Colorado and having miss five shows in 2021.

Then, Mayer had to cancel the band’s show on July 6 at the Saratoga Performing Arts Center due to his father being hospitalized, leaving many to wonder if the July 10 Philadelphia show, or the rest of the tour would be postponed.

On a picturesque evening on Sunday, July 10 Dead and Company cemented the band’s strong connection with the City of Brotherly love with an outstanding performance of nearly three hours of uninterrupted musical magic. Pulling into the parking lot at the sports complex there was an air of excitement that lifted the concertgoers from their cars to the unofficial pre-concert festival at Shakedown Street.

Part carnival, part craft fair, the traveling festival that follows the band and sets up in an empty lot traditionally outside of every Grateful Dead show contains every type of libation and concert accessory anyone could imagine – from fanny packs to tie-dye, vegan tacos, custom pins and poster, Advil, Claritin and of course, the search for a miracle, a free ticket to the show.

The Shakedown Street was one of the biggest and best that I have been to, including various cover bands and meeting lots of new friends including Reddit user DeadBrickHead who was handing out free buttons to people. Full of tacos and cannabis confectionaries, I was ready to see the scene on the inside where the Phillies infield was transformed into a sea of swaying fans all facing the outfield where, in the shadow of the neon Liberty Bell, Dead and Company played for nearly three hours of songs covering the band’s extended catalog.

The concert poster for the evening depicted the Dancing Bears inside the bell tower ringing the Liberty Bell as an indication of the memorable show the band was about to perform.

Without wasting much time, Dead and Company began with a spirited version of “Truckin'” the classic Grateful Dead song, as John Mayer began to warm up his fingers under the lights.

At 44 years old, Mayer is the youngest member of the band and looked like a kid prodigy in a music store while sporting a pair of Audio-Technica monitors on his head on stage.

He wrote on Instagram last year “I’ve started wearing headphones on stage, which has several benefits, among them being able to have more of a dynamic touch on the guitar while also protecting my hearing. I’m actually more connected to the band, the music and the moment this way.”

With his precision and feel for directing the flow of the music, Mayer can wear an astronaut helmet on stage if it helps him hear and play better.

The band melted into the second song, a cover of Bob Dylan’s “All Along The Watchtower” with Weir drawing out the verses to allow more space for psychedelic guitar fills.

The video effects throughout the night were fitting with the 60s-style liquid light show superimposed over the band performing and even some heavy perception covering the screen for “Looks Like Rain.”

Despite keeping the party going for nearly 60 years, Weir and Hart were energized through the end of the first set, blazing through fan-favorite “Brown-Eyed Women.” The set closed with a tireless version of “Deal” that had the stadium shaking just across the bridge and down the expressway from Atlantic City, New Jersey. The crowd lit up as the lights went down as the band began the second set with “Samson and Delilah.”

Mayer’s voice was as strong as his guitar throughout the Grateful Dead classics including “I Know You Rider.” Led by Hart without his fellow Rhythm Devil, the 80s percussion and ambient tracks “Drums” and “Space” captured nostalgia of the moment.

That brief break for Weir and Mayer gave them time to recharge for a soulful “Cumberland Blues.” The band closed out a happy crowd of revelers dancing barefoot to “Franklin’s Tower” to end the show.

The band members barely left the stage before returning with an encore of “Brokedown Palace” and “Casey Jones” was still ringing in people’s ears as they searched Shakedown Street for one last grilled cheese for the road.

The Dead and Company summer tour will continue July 12 at The Pavilion at Star Lake in Burgettstown, Pennsylvania, and July 15 and 16 at Citi Field in New York City, New York.

Purchase a video of the show on nugs.net or listen to bootleg a tape of the show at Archive.org