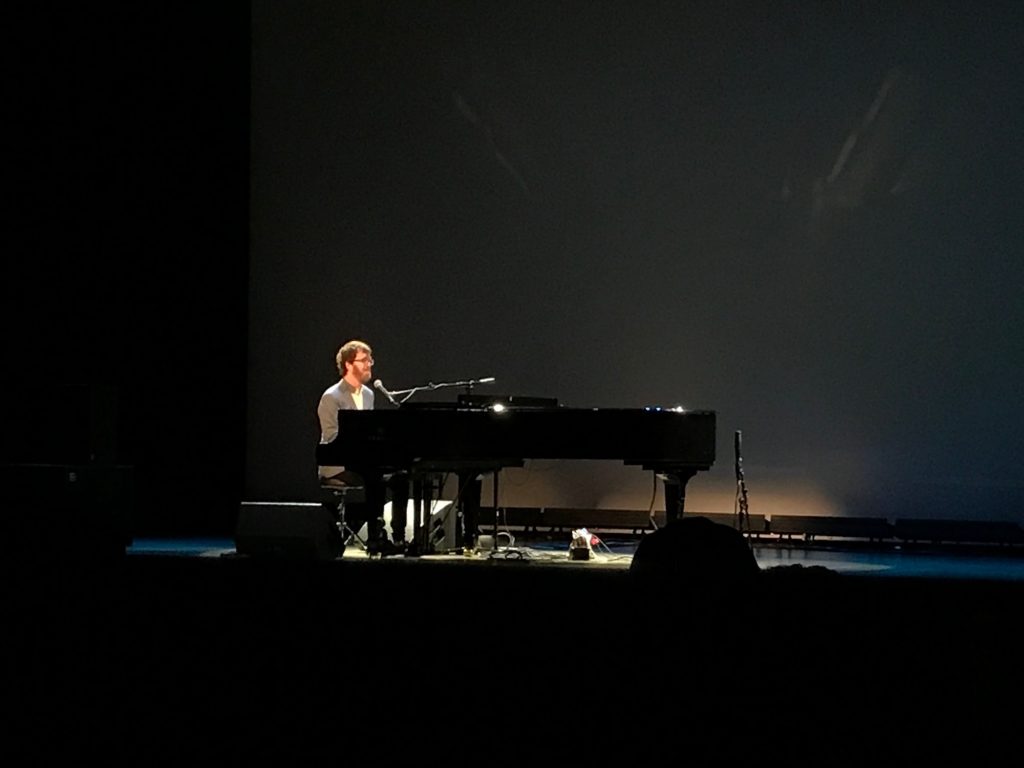 Like most people on Friday night in Atlantic City, Ben Folds was feeling lucky.

The phenomenal pianist who became first became popular with Ben Folds Five during the MTV era and more recently has composed concertos, is a masterful musician. He walked in with modest confidence and a plan, but after he sat down to play, Folds took a gamble that would win over the house.

Folds packs a powerful piano. The black Yamaha stood center stage awaiting its master as a crowd of eager fans filed into The Music Box at Borgata Hotel Casino and Spa Friday, April 21.

The 1,000-seat theater is the best place in the city to see a concert. It’s an intimate venue with auditorium seating on the floor and risers in the back so there is a great view of the stage with excellent sound from any seat.

Billed as “Ben Folds and a Piano,” the crowd was confused when Ryan Lerman walked onto the stage and picked up a guitar. Some, who thought it was Folds, stopped clapping as soon as they begun. One guy yelled out, “Let’s hear it for the tech.” To which Lerman replied, “I’m my own tech. It’s a very low budget performance.” By the time he finished playing his first song, he had won over the crowd.

Lerman, who began playing bass with Folds at 23-years-old, has written for and performed with Michael Bublé. On Friday, he played five songs including ”Half of the Way,” which has been covered by Bublé, and a Gilbert O’Sullivan cover.

He played “If I’d Never Seen Your Face,” using the FunkBox Drum Machine on his phone, saying the song was written about a girl who cheated on him with his drummer. Someone yelled out, “That’s why you play with a drum machine now,” which Lerman took in stride with a chuckle. He played solo with an electric guitar until he was joined by Folds on drums for the closing number, “Do With You,” which he recorded with the headliner.

After a brief intermission, the lights dimmed and The Beatles’ “One Is The Loneliest Number,” played over the sound system. Then, the 50-year-old singer-songwriter took the stage wearing a blue blazer and white dress shirt, sat down at the piano and proceeded to play the shit out of the piano from 9:50-10:25 p.m.

He opened with “Phone in a Pool,” then played “Annie Waits,” and a couple more songs before saying, “I’m just going way off setlist here, so fuck it.” He then played an incredible version of “Late,” which he wrote for Elliott Smith and followed it up with a rocking version of “Uncle Walter.”

Known for being one of the most dynamic singer-songwriters performing today, Folds seemed loose at the piano on Friday night. “If you drove to see me, I appreciate you coming,” Folds said.” He said he also appreciated the casino patrons that got free tickets for sticking around.

When he forgot the words to the second verse of “Sentimental Guy,” he looked up at the ceiling and said “What are the fucking words,” then looked over at the crowd for the line. When he got it, he and jumped right back into the song while ad-libbing the line, “I didn’t miss any notes, I didn’t miss any words.” When he finished, he turned to the audience and said to someone sitting near the stage, “That’s the best cue I’ve ever gotten in my life. That’s what happens when you go completely off the setlist and do shit you normally don’t do.”

Throughout the show, Folds proved exactly what a fairly unassuming guy can do with a piano and his voice. Although he was by himself, he managed to overpower the entire room during a furious version of “There’s Always Someone Cooler Than You.” Even when he wasn’t, Folds seemed completely in control of the room as people sat on the edge of their seats, mouthing the words he sang or filling in with background vocals on “You Don’t Know Me.”

Noticing the freewheeling attitude of Folds, the audience happily threw out suggestions to him between songs and he did take a request from the audience for “The Ascent Of Stan.” Later in the show, after playing “So There,” he turned to the audience and said, “I’m just playing stuff I don’t normally play. I appreciate you giving me a little slack,” and he then broke into “Philosophy.”

After playing “Landed,” Folds got up from the piano bench and walked to the edge of the stage as the audience hurled requests at him. “It sounds like the UFC out there,” Folds said. “There’s three guys yelling ‘Freebird’ really loud.” He turned around at sat at the piano and started playing “Freebird,” ad-libbing the lyrics, “I don’t know if I know the words, but the melody is here,” and jumped right to the breakdown.

“This girl was screaming her brains out. I thought she called me a bastard, and don’t I deserve it,” Folds said to the crowd with a smile. “I don’t know if a four-part counterpart is done often in a casino but it goes.” He broke up the audience into sections, assigning each one of the four vocal parts. He conducted the crowd until he was satisfied, then walked to the piano, played “Bastard,” and again directed his impromptu chorus to end the song.

Folds closed the show with a rocking version of “Zak and Sara,” and walked offstage to a standing ovation. He returned after a few moments to play “Army” for the still-standing crowd. When he finished the encore, he took a small bow at center stage started walking stage left. Then, he paused for a moment, gave a wave and two thumbs-up with a wry smile and disappeared behind a curtain. As the house lights came up, “All By Myself by Celine Dion played over the sound system.