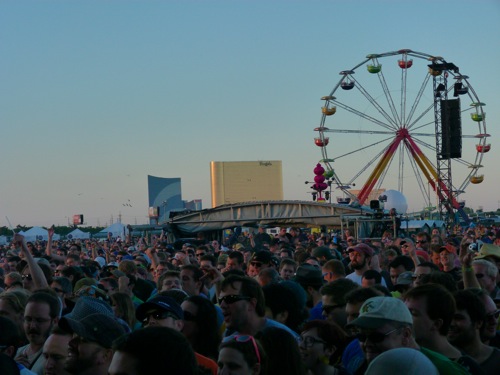 Memorial Day is the unofficial start of summer and the musical calendar is filling up faster than a hot barbecue on the Fourth of July. My agenda is already jammed with music so I compiled this list of concerts and musical events for festival season in the Atlantic City area and beyond.

The Ventnor City Summer Beach Jams are 5-9 p.m. Saturday nights at the beach on Newport Avenue, behind the Ventnor Library and Cultural Arts Center. The family-friendly atmosphere includes food and crafters as well as a playground with music beginning at 6 p.m.

Also in Ventnor, the Sunset at Ski Beach lineup includes crafters, food, music and movies on Wednesdays. The Sensational Soul Cruisers will play Philadelphia soul, Motown, rhythm and blues and disco 6-9 p.m. Wednesday, June 9, from 6 p.m. and the Legacy Band will play classic hits from the 70s to today 6 p.m. Friday, June 25. Wawa Welcome America will once again put Philadelphia center stage for America’s birthday. The concert, featuring Bebe Rexha, with special guest Flo Rida, and a feature performance by the Philly POPS is 7-9 p.m. Sunday, July 4 at TD Pavilion at The Mann Center For The Performing Arts and will be broadcast live on NBC10 and Telemundo62. Tickets are limited and pre-registration is required. See welcomeamerica.com for information.

AC Jams, a new, all-ages concert series will present live music and food trucks 6 p.m. Thursdays at Showboat Hotel and Resort’s Garden Pier presented by Showboat, Lucky Snake and Ed Maier of ElmThree Productions. The first 10 attendees of each show will receive a free poster. Doors open at 6 p.m. and the music will play from 7-11 p.m. Jam band Phish has rescheduled its 2020 show to Friday, Aug. 13-Sunday, Aug. 15 at The Playground pier. See Phish for information.

Wildwoods is once again hosting the Barefoot Country Music Festival Aug. 19-22 between the famous Morey’s Piers on the beach. Headliners include features headliners Carrie Underwood, Zac Brown Band, Dan + Shay, and Lynyrd Skynyrd among others. See barefootcountrymusicfest.com for information. After going all virtual last year, the 59½ annual Philadelphia Folk Festival will hold a pocket-sized festival Aug. 21-22 at the Spring Mountain Ski Area in Upper Salford Township, Pennsylvania. The hybrid event will combine elements of both the traditional live event and the virtual event curated for last year’s fest. See my full preview here. See FolkFest.org for information. One of the coolest festivals in the world is returning to Asbury Park – Sea.Hear.Now combines music, art, and surf culture Sept. 18-19 featuring Pearl Jam, The Smashing Pumpkins and Ventnor’s own surfing phenom Cassidy McClain at 5th Avenue beach. See seaherenow.com for information.

More than 100 bands will take over The Woodlands of Dover International Speedway for Firefly Sept. 23-26 featuring Billie Eilish, The Killers, Tame Impala and Lizzo. See Fireflyfestival.com for information.

Coachella will return next year, April 15-17 and 22-24, 2022 at the Empire Polo Club in Indio, California. Tickets are on sale now. See Coachella.com for information.

Let me know what concerts or festivals you’re going to in the comments below and on social media.